February 3, 2017 by Kimberley Johnson No Comments 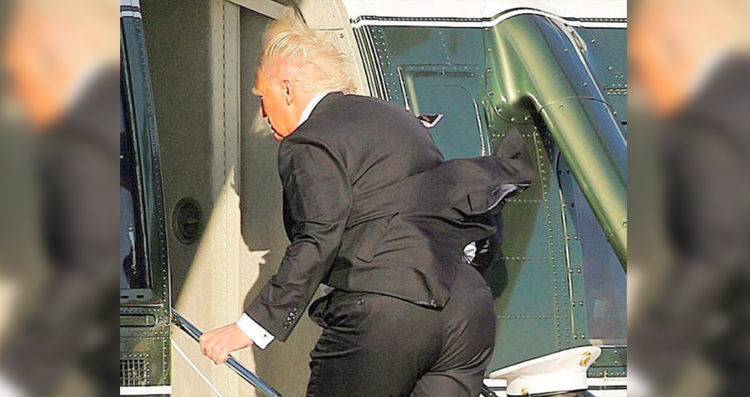 Aside from grabbing women by the genitals, having a psychotic meltdown if his wife doesn’t have dinner waiting for him the second he gets home from work, and judging women’s appearances by assigning them numerical value, Trump also believes that women who work for him should “dress like women,” unnamed sources told *Axios (a new site created by Politico co-founders).

A report released Thursday describes Trump as being very critical of his employees’ looks –both men and women. Surprise!

(This is where one wonders if Trump owns a mirror. Has he seen himself? Has he seen his boxy, misshapen suits, unusually wide and long ties, and his crazy yellow hair?)

According to the report, an anonymous Trump campaign source said that the men who work for him are required to wear ties at all times, and even if women employees wear jeans, they “need to look neat and orderly.”  Trump wants women who work for him “to dress like women.”

Trump is an equal opportunity hypocrite because he demands just as much from the men who work for him.

In January, The New York Times reported that the suit White House Secretary Sean Spicer was wearing during his first ever press briefing was not up to Trump’s standards. Evidently he wasn’t dressing “fancy” enough as he lied to the world about the crowd size at Trump’s inauguration.

According to the source, Spicer’s suit was too large, his sleeves looked sloppy, his collar didn’t fit, the fabric looked inexpensive and his tie was poorly knotted.

The one exception is Trump’s chief strategist, Steve Bannon – the white supremacist slob who’s currently running the government in secret with no paper trail. He gets to dress however he wants to dress, because he’s essentially Trump’s brain.