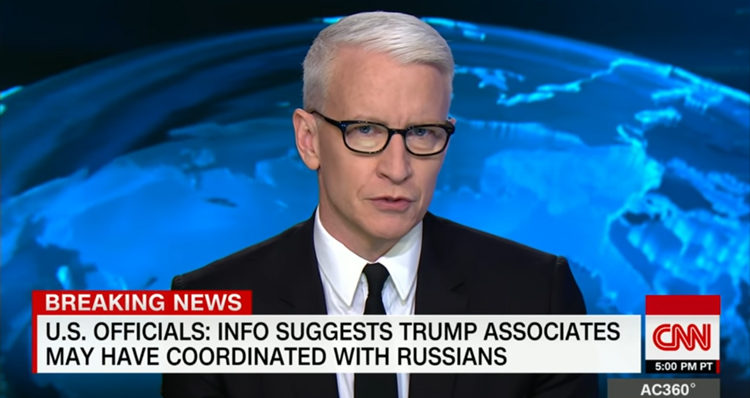 U.S. officials are saying that information obtained by the FBI suggests that Trump associates may have coordinated with suspected Russian agents.

CNN reported Wednesday night that “The FBI has information that indicates associates of President Donald Trump communicated with suspected Russian operatives to possibly coordinate the release of information damaging to Hillary Clinton’s campaign.”

According to CNN, this revelation is “partly what FBI Director James Comey was referring to when he made a bombshell announcement Monday before Congress that the FBI is investigating the Trump campaign’s ties to Russia, according to one source.”

According to the CNN report: “The FBI is now reviewing that information, which includes human intelligence, travel, business and phone records and accounts of in-person meetings, according to those U.S. officials.”

As Vox reports, “Some US officials warned CNN that it’s too early to draw any major conclusions from the information so far, because it’s largely circumstantial. Still, the officials reportedly told CNN that potential collusion between Trump associates and Russian officials is now a large focus of the FBI investigation.”

This information comes in the wake of other startling revelations about possible Trump-Russia collusion that has come to light the last 24 hours.

In an explosive expose, the Associated Press revealed on Wednesday that Paul Manafort, who ran Trump’s campaign from April to August 2016, secretly worked for a Russian billionaire to “greatly benefit” Russian President Vladimir Putin’s interests

Wednesday evening, Rep. Adam Schiff (D-CA), the top Democrat on the House Intelligence Committee, told MSNBC host Chuck Todd that he has seen “more than circumstantial evidence” of collusion between Trump associates and Russia during the 2016 campaign.

As NBC News reports, “Questioned whether or not he has seen direct evidence of collusion, Schiff responded, ‘I don’t want to get into specifics but I will say that there is evidence that is not circumstantial and is very much worthy of an investigation.’”

You can watch CNN‘s Anderson Cooper discussing some of the details of this latest information in the short clip below and you can go here to view the entire segment.