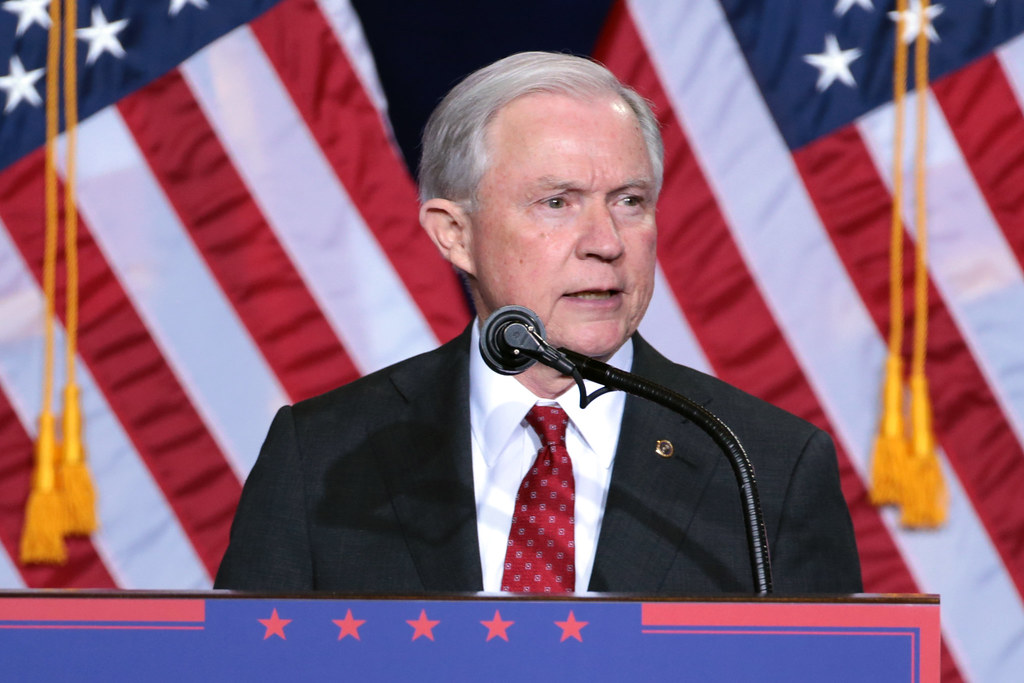 A Who’s Who list of Democrats and Republicans, progressives and activists, are blasting Attorney General Sessions in light of the news that he lied to Congress about Russia.

Social media explodes with Democrats and Republicans alike blasting newly appointed Attorney General Jeff Sessions in the wake of reports that he lied to Congress regarding his communications last year with Russia at a time when he was advising the Trump campaign.

The Washington Post, who first broke the story, reported last night that

One of the meetings was a private conversation between Sessions and Russian Ambassador Sergey Kislyak that took place in September in the senator’s office, at the height of what U.S. intelligence officials say was a Russian cyber campaign to upend the U.S. presidential race.

The previously undisclosed discussions could fuel new congressional calls for the appointment of a special counsel to investigate Russia’s alleged role in the 2016 presidential election. As attorney general, Sessions oversees the Justice Department and the FBI, which have been leading investigations into Russian meddling and any links to Trump’s associates.

Beloved Star Trek Actor and activist George Takei was quick to respond with a series of tweets beginning last night.

In one he questioned Sessions’ ability to continue to lead the Justice Department and FBI investigations into Trump and his staff’s alleged ties to Russia.

So if the Attorney General lied to Congress, who brings the charges? Asking for a friend.

Alluding to Trump’s first speech before a “joint session” of Congress, Takei tweeted the possibility that Sessions would end up in prison (“the joint”):

Sen. Elizabeth Warren blasted Sessions in a series of 6 tweets that read in their entirety:

It’s a simple q[uestion]: “Have you been in contact with anyone connected to any part of the Russian government about the 2016 election?” Jeff Sessions answered “No.” Turns out he met with the Russian Ambassador. Two months before the election. Now Jeff Sessions is AG – the final say on the law enforcement investigation into ties between the Trump campaign & Russia? What a farce. This is not normal. This is not fake news. This is a very real & serious threat to the national security of the United States. We need a special prosecutor totally independent of the AG. We need a real, bipartisan, transparent Congressional investigation into Russia. And we need Attorney General Jeff Sessions – who should have never been confirmed in the first place – to resign. We need it now.

And we need Attorney General Jeff Sessions – who should have never been confirmed in the first place – to resign. We need it now.

Sen. Al Franken (D-MN) is at the heart of the controversy. As NBC News reports: Franken “questioned Sessions during his confirmation hearing about whether he or anyone affiliated with the Trump campaign spoke with the Russians last year.”

“I have been called a surrogate at a time or two in that campaign, and I did not have communications with the Russians, and I’m unable to comment on it,” Sessions responded at the hearing.

Franken took to his Facebook page, posting a link to The Washington Post article breaking the news.

“Many Americans are rightly concerned by the Trump team’s close ties with the Russian government and the role that Russia played in interfering with our presidential election,” he began before addressing Sessions actions directly.

When then-Senator Jeff Sessions testified under oath during his confirmation hearing to become attorney general, he explicitly told me that he had not been in contact with Russian officials in the course of the presidential campaign. But according to a report from the Washington Post, he actually met with the Russian Ambassador during that time period. If that’s true, then I am very troubled that his response to my questioning during his confirmation hearing was, at best, misleading.

“In light of these revelations, I’m going to be directly pressing Attorney General Sessions to answer some tough questions about his contact with Russia and his testimony before the Judiciary Committee,” he continued – concluding by demanding that Sessions recuse himself from the Department of Justice and FBI investigations of the Trump-Russia connection.

The American people deserve to know the truth about what happened between Russia and the Trump team, and I believe we need thorough and impartial investigations to get to the bottom of it. It’s clearer than ever now that the attorney general cannot, in good faith, oversee an investigation at the Department of Justice and the FBI of the Trump-Russia connection, and he must recuse himself immediately.

As NBC News reported this morning, while Sessions is denying any wrong-doing he affirmed that he would recuse himself if necessary.

“I have not met with any Russians at any time to discuss any political campaign,” he said in exclusive remarks with NBC.”Those remarks are unbelievable to me and are false. And I don’t have anything else to say about that.”

Asked by NBC whether he would step down from the investigations, he responded: “I have said whenever it’s appropriate, I will recuse myself. There’s no doubt about that.”

Some Republicans like Rep. Jason Chaffetz of Utah, chair of the House Committee on Oversight and Government Reform called on Sessions to recuse himself:

AG Sessions should clarify his testimony and recuse himself

“I’ve been on the Armed Services Com for 10 years. No call or meeting w/Russian ambassador. Ever,” she tweeted.

I've been on the Armed Services Com for 10 years.No call or meeting w/Russian ambassador. Ever. Ambassadors call members of Foreign Rel Com.