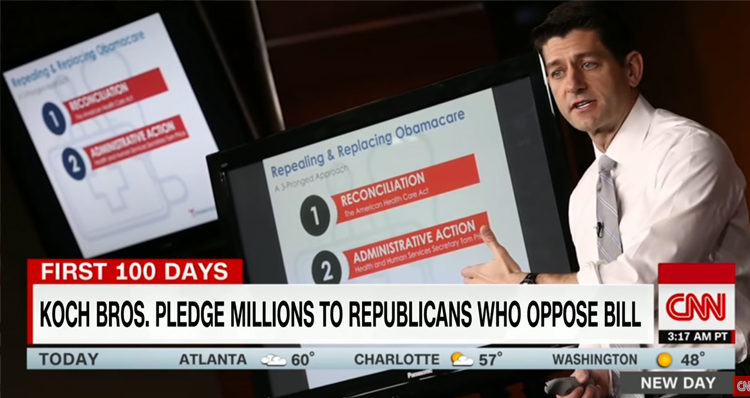 Supporters of Obamacare have found unlikely allies in the Koch Brothers, at least when it comes to saving Obama’s signature health care law.

The Republican-led House of Representatives is set to vote on their replacement plan for Obamacare today – and the vote is destined to be tight.

On the flip-side, Trump has been threatening Republicans who don’t practice blind allegiance, threatening House Republicans on Wednesday that they might lose their seats in 2018 if they don’t vote to repeal Obamacare.

However, at the same time there are some unlikely allies on the right who might actually save Obamacare from repeal on Thursday.

As Reuters reported on Wednesday, many Republicans trying to decide whether to support the GOP’s replacement bill face a “tough choice.”

According to Reuters: “If they vote against, they could face the wrath of a vengeful and combative president. If they vote for it, they risk retribution from the billionaire brothers Charles and David Koch and other powerful right-wing players whose money can be pivotal in re-election races.“

“As Trump and leaders in the House round up support for the bill ahead of a planned Thursday vote, some groups are threatening to retaliate against those who do support it, including the Club for Growth, the Heritage Foundation’s political arm, and Americans for Prosperity, which is part of the expansive political pressure network established by the Koch brothers.”

Market Watch reported Wednesday night that the Koch Brothers had raised the ante, vowing to fund the re-election efforts of any Republicans who vote against Trump’s repeal and replace bill.

A powerful network of conservative donors, backed by the billionaire Koch brothers, have vowed financial support to House Republicans in their 2018 reelection races — if they vote against the health-care bill backed by the Trump administration.

The seven-figure reserve fund by the groups Americans for Prosperity and Freedom Partners, announced Wednesday night, will be spent on media advertising, direct-mail fliers and grassroots canvassing, and may appeal to on-the-fence Republicans worried about President Donald Trump’s veiled threat that they’ll lose their primary races in 2018 if they oppose the bill.

What happens on Thursday remains to be seen and with 30-40 members of the ultra-conservative House Freedom Caucus saying they oppose the bill, the odds are high that Speaker Paul Ryan (R-WI) might end up cancelling the vote.

However, this promise of campaign funds by the Kochs might end up being the ultimate deciding factor for many on-the-fence Republicans. After all, as Reuters reports:

The Koch[s] network spent an estimated $250 million on last year’s election. The Koch-run Americans for Prosperity, which has chapters in more than 30 states and boasts that it can deploy 3.2 million citizen activists, spent almost $14 million on the 2016 elections, according to federal records. Freedom Partners, another Koch entity which largely targeted Democrats with attack ads, spent $30 million.

[And] House Republicans have been nervous about primary challenges since 2014 when Eric Cantor, then the majority leader, lost to a little-known conservative named David Brat.