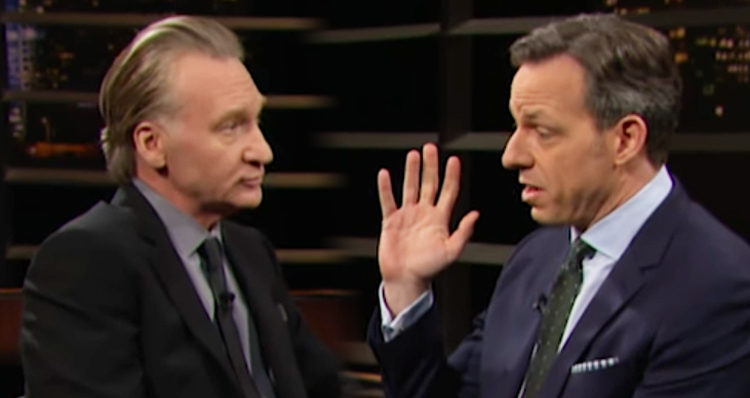 Jake Tapper rips Trump, telling Bill Maher that he’s “never really seen this level of falsehood before,” that “my children know better” than to behave that way.

Jake Tapper has been on a roll lately when it comes to speaking his mind about Trump.

Friday night, he delivered a scorching monologue on CNN, ripping into Trump’s pathetic efforts to defend his baseless wire-tapping allegations – calling them an “embarrassment.

Then he ripped Trump to shreds during a one-on-one interview with late night host Bill Maher, at one point calling Trump’s behavior “indecent” – adding that “My children know better than that.”

Maher began the interview by complimenting Tapper’s good work with “speaking truth to crazy,” referring to his coverage of the Trump administration.

Maher went on to ask Tapper how his job had changed since Trump assumed office “because you certain sound different than I ever saw you for the many years I’ve watched you.”

Referring to an earlier segment on the show, Tapper stated “You were just talking about how Democrats weren’t forthright about Obamacare and we can go to the Iraq War and all and on and on. I’ve never really seen this level of falsehood just quantitatively because it’s not just ‘if  you like your doctor you can keep your doctor,’ it’s conspiracy theories based on nothing that have members of his own party distancing themselves from him.”

Continuing, he remarked that Trump’s lies are “combined with an attempt to discredit the entire fourth estate, the entire media – we’re all ‘fake news’ – all of us except ‘Fox and Friends.'”

Asked about the media’s approach to Trump by Maher, Tapper responded that he did not “buy into the paradigm” that the media was afraid of criticizing Trump out of fear that they would be accused of being biased.

“The truth of the matter is that there’s no bias when it comes to facts and there’s no bias when it comes to decency,” Tapper explained, adding that “It is empirically indecent to make fun of the disabled. You don’t have to be a Democrat or a Republican or Independent or socialist or libertarian. That is just indecent. My children know better than that.”

Maher concluded the interview by asking Tapper what he thought about Trump’s announcement that he would not be attending this year’s Annual White House Correspondents Dinner.”

Tapper responded: “He does have a way with words,” before going on to explain that Trump won’t be missed at the event.

“It doesn’t bother me that he’s not going,” Tapper said. “The truth of the matter is that it’s a great dinner for the scholarship that it pays for journalism students – it’s a great dinner to recognize great journalism. I think that most of us in Washington probably feel ambivalent about the whole idea of schmoozing [with Trump]… I don’t think it’s any great affront to democracy that he’s not coming. I think it’s fine. I’m sure vice president Pence will fill the role well.”