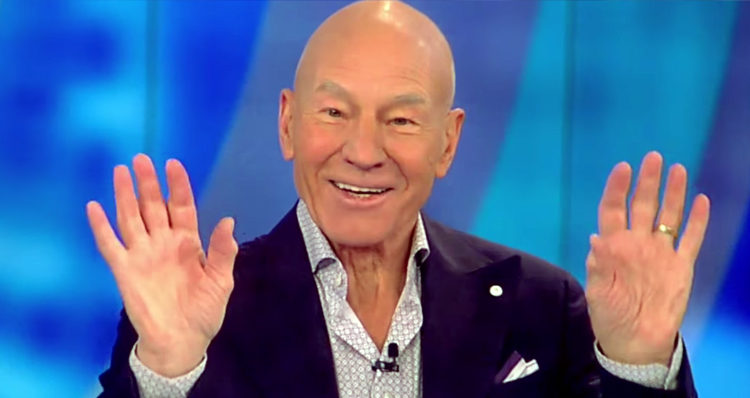 Patrick Stewart is applying for U.S. citizenship in order to fight Trump.

English actor Patrick Stewart is well known for playing heroic characters such as Capt. Jean-Luc Picard in “Star Trek: The Next Generation” along with its successive feature films and Professor Charles Xavier in the “X-Men” series of superhero movies.

In an interview on ABC’s “The View” Stewart announced that he is applying for U.S. citizenship in order to fight Trump.

Stewart began that portion of the interview discussing a tweet he made in February about a visit he made to Washington D.C. with host Joy Behar.

In the tweet he stated that he “Had the worst sleep of my life last night,” adding that: “I was sleeping less than 300 yds from where Donald Trump sleeps. Could there be a connection?”

Had the worst sleep of my life last night. But I was sleeping less than 300 yds from where Donald Trump sleeps. Could there be a connection?

He went on to explain that he and his wife were in Washington to meet with three friends that he described as “Washington insiders” and realized after he opened the curtains that he was next to the White House.

Referring to his tweet as “fairly innocent,” he added that he “did not directly insult your president.”

The rest of the panel joked that he wasn’t their president either, and Behar asked if he would be willing to take Trump off their hands.

“We have our own problems” he replied, adding “we have Brexit.”

“However, there is, maybe it’s the only good thing, as the result of this election: I am now applying for citizenship. Because I want to be an American, too. Because all my friends in Washington said there is one thing I can do: ‘fight, fight, oppose, oppose,’ but I can’t do it because I’m not a citizen.”