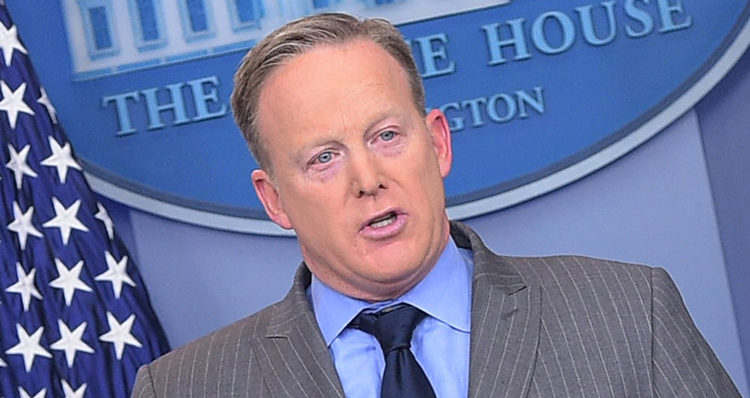 Comey’s disclosures left Trump stranded alone in a Sea of Conspiracies – to lighten things up Jimmy Kimmel put together this video of Sean Spicer gaffes.

As Jimmy Kimmel explained Monday night, when all the the mud gets stirred up in the Trump administration, Trump’s White House Stress Secretary Sean Spicer has to come out with a bucket and attempt to mop up the mess – to “explain that the hell is going on.”

As NBC News reports: “Leaders in Congress, law enforcement, and intelligence are struggling to convince one man that an investigation he imagined never existed and that another probe that he refuses to acknowledge is real.”

The surreal dynamic reached its zenith on Monday, as FBI Director James Comey and NSA Director Mike Rogers confirmed there’s no evidence to back up President Donald Trump’s accusation that President Barack Obama illegally ordered a wiretap of Trump Tower. “I have no information that supports those tweets and we have looked carefully inside the FBI,” Comey said.

In a more explosive revelation, Comey also said the FBI was investigating potential links between the Trump campaign and Russian hacking in the 2016 election, an issue Trump tweeted just that morning was “made up” by Democrats to excuse their loss in November.

Kimmel continued, explaining that since Monday was such a difficult day, they put together a “curated assortment of the stumbles and bumbles from Sporty Spicer” to help lighten the mood.