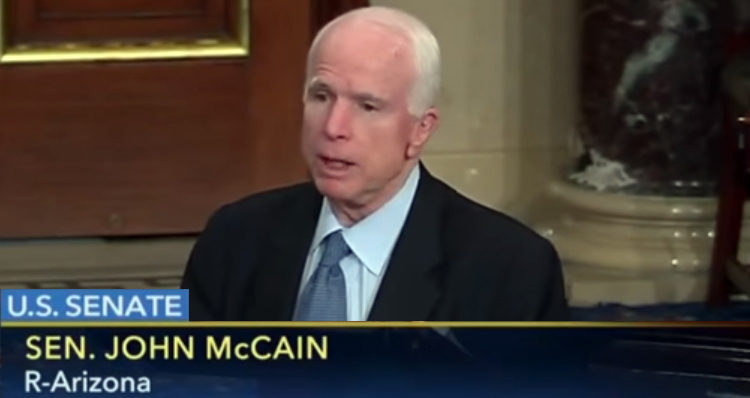 Things get heated in the Senate as John McCain accuses Rand Paul of working for Putin.

As Salon reports, Sen. Paul “was called out by Sen. John McCain, R-Ariz., for blocking a treaty that would have hindered Russian dictator Vladimir Putin’s foreign policy goals by helping Montenegro join NATO.”

“If there’s objection, you are achieving the objectives of Vladimir Putin,” McCain warned as he made the motion to approve the treaty. “If they object, they are now carrying out the desires and ambitions of Vladimir Putin, and I do not say that lightly.”

The treaty requires a unanimous vote by the Senate, and Paul cast the only objection and promptly exited the Senate floor without further comment.

McCain strongly denounced his actions as Paul was departing the chamber.

“I note the Senator from Kentucky leaving the floor without justification or any rationale for the action that he has just taken,” McCain said, adding: “That is really remarkable. That a senator blocking a treaty that is supported by the overwhelming number – perhaps 98, at least, of his colleagues – would come to the floor, and object, and walk away – and walk away! The only conclusion you can draw when he walks away is he has no argument to be made. He has no justification for his objection to having a small nation be part of NATO, that is under assault from the Russians.”

“The senator from Kentucky is now working for Vladimir Putin,” McCain concluded.

Paul responded on Thursday morning during an appearance on MSNBC’s Morning Joe.

“I think maybe he’s past his prime,” he stated, referring to McCain. “I think he’s gotten a little bit unhinged.”