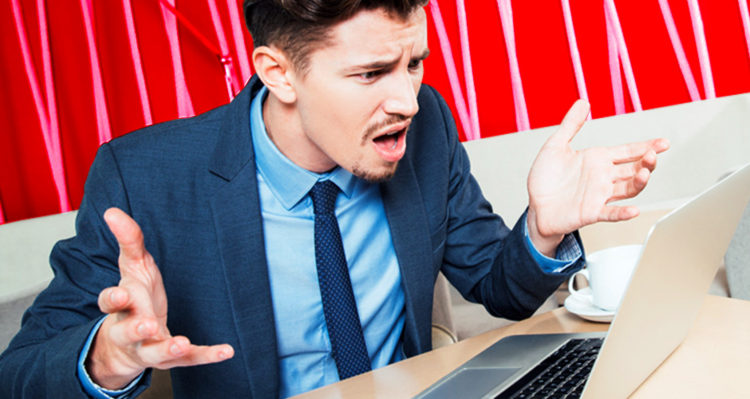 Another cringe-worthy day in the life of a liberal from Texas battling it out with a childhood friend who grew up to become a rabid Facebook conservative.

Most of us have at least one childhood friend who has gone from being that shy kid in the back row of the classroom to a boisterous pain-in-the-ass, spending entirely to much of his or her time on social media stirring up trouble.

Yet for all their petty online skirmishes – some minor battles, others friendship terminating wars – sometimes what they don’t say is just as interesting as what they do volunteer.

For some reason my decades-long friend Name Changed to Protect the Guilty has remained silent throughout the whole affair despite the fact that CNN reports that: “Members of both parties acknowledged the risks of the change. It essentially allows the majority party to clear future Supreme Court nominees with ease, so presidents could appoint more ideological nominees that wouldn’t require much, if any, bipartisan support.”

Senator Joe Manchin who crossed the aisle and sided with Republicans to affirm Gorsuch’s nomination warned that invoking the nuclear option was “sad” that the Supreme Court will no longer “have a check and balance system, adding that the Senate will “rue the day that this happened.”

However, back in 2013 when then Senate Majority Leader Harry Reid invoked the nuclear option for executive branch and non-Supreme Court judicial nominations Name Changed to Protect the Guilty had plenty to say.

You can click here to read “You ever get sick and tired of the rabid hatred from conservatives on Facebook?” the article in which we first introduced our readers to Name Changed to Protect the Guilty.

On November 21, 2013 – the day Harry Reid invoked the nuclear option I posted a link to an article of mine about that action on my Facebook profile: 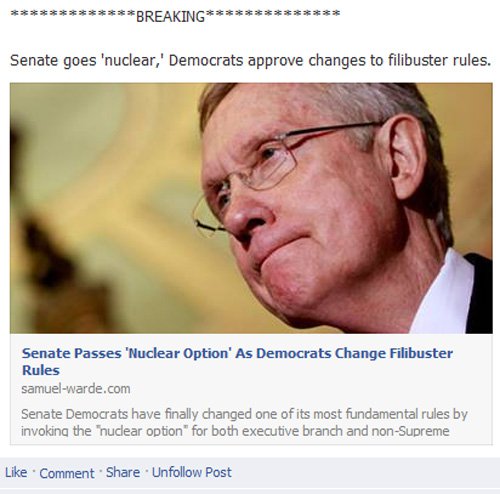 NAME CHANGED TO PROTECT THE GUILTY: Harry Reid is a low-life traitor. He deserves to die.

Rick R:  Bout time to hand out the pacifiers. They’re starting to whine.

NAME CHANGED TO PROTECT THE GUILTY: The shoe will be on the other foot someday, Rick Ritchie. Is this how you want government to be conducted?

Harry Reid is no patriot, Sam, he is one of the most corrupt politicians we’ve ever witnessed. Yeah, I hope that p.o.s. dies by the end of the day and goes to Hell.

NAME CHANGED TO PROTECT THE GUILTY: BTW, Harry Reid objected to this very thing when he was in the minority. He is human garbage. He deserves a low, slow, painful decapitation.

Rick R:  Because the Government was being conducted so well relying on Republicans to do something useful?

NAME CHANGED TO PROTECT THE GUILTY: Don’t act like the Democrats are any better than Republicans because they have pretty much helped bring this country down. The slide has not stopped. Freedom will soon be a thing of the past.

Rick R:  I guess you could vote to repeal Obamacare. Gosh, you haven’t done that yet this week.

NAME CHANGED TO PROTECT THE GUILTY: The GOP is complicit in the destruction of our country. It’s time for a rebirth through blood and fire.

NAME CHANGED TO PROTECT THE GUILTY: We’ll start by throwing all the Statists on the fire.

NAME CHANGED TO PROTECT THE GUILTY: Lists are being made.

John C: I say it’s about time. Show me one thing positive out of the Republican party in the last 40 years. There’s nothing to show but damage to the country and destruction of the middle class.

Vicki R.:  Republicans are willing to block executive branch nominees even when they have no objection to the qualifications of the nominee, because they don’t want President Obama to appoint any judges to certain courts. The so called “nuclear option” will apply equally to both parties, so when Republicans are in power, these changes will apply to them as well, it’s simple fairness. Changing the rules to make Congress work again is just common sense. Just saying.

NAME CHANGED TO PROTECT THE GUILTY: Can you read? Harry effing Reid objected to this same thing when he was in the minority. Pull your heads out of your asses.

NAME CHANGED TO PROTECT THE GUILTY: Death to marxists, socialists, and statists.

I hate you effing Statists, and Socialists.

Jim N Just be calm and remember that in politics PAYBACKS ARE A BITCH! Remember that Harry!

NAME CHANGED TO PROTECT THE GUILTY:  Unfortunately, Harry Reid has nothing to worry about. He has power and a wheelbarrow full of money. Even when he leaves office he’ll still be rich and connected. That is why I am hoping for his death to make headlines soon.

Jim N:  He may have a wheelbarrow full of money NAME CHANGED TO PROTECT THE GUILTY but he has constituents who absolutely HATE him. The only reason why he won his last election was b/c the Tea Party candidate that opposed him was a moron. BTW…wishing for his death is just a little overboard.

NAME CHANGED TO PROTECT THE GUILTY: I know Republicans who voted for him, and yeah, she was a nut, but it also has to do with Nevada not wanting to give up the influence of such a high ranking power broker. I heard many people say that he’s good for Nevada because he can bring money here. That’s a joke! We have one of the worst economies in the country.

NAME CHANGED TO PROTECT THE GUILTY: There’s nothing funny about Statism.