April 18, 2017 by Kimberley Johnson No Comments 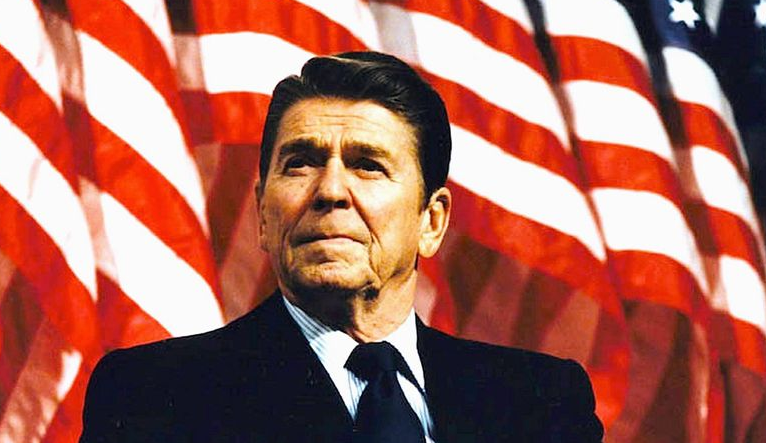 The mere mention of President Ronald Reagan gets modern conservatives and many supporters of Donald Trump all tingly in their naughty parts.

Conservatives, who praise Reagan as if he were a conservagod, often overlook the former President’s core message of tolerance. (Kind of like the way they cherry-pick the Bible to suit their hatred and fear of anything they don’t like.)

Whether Reagan was talking was about civil rights, religion in government or bigotry of any kind, his words sound more like a modern-day liberal than almost anyone in today’s Republican party.

“A nation’s greatness is measured not just by its gross national product or military power, but by the strength of its devotion to the principles and values that bind its people and define their character. Our civil rights: on that subject, we are enforcing the law with new determination. Since we took office, the Justice Department has filed more criminal charges on civil rights violations, brought more violators to trial, and achieved more civil rights convictions than any one before us. I’ve said this before, and I’ll say it again: As President, I will continue to enforce civil rights to the fullest extent of the law.

That’s why I have appointed to the Civil Rights Commission people like Commissioners Clarence Pendleton and Morris Abram and Staff Director Linda Chavez. They recognize that you cannot cure discrimination with more discrimination … And as long as I’m President, we’ll have a Justice Department which argues for the rights of individuals to be treated as individuals, whether the case involves hiring, promotions, layoffs, or any other matter subject to the law.”

Reagan also brought up the separation of church and state. Earlier this year, Trump vowed to “overturn a law restricting political speech by tax-exempt churches, a potentially huge victory for the religious right and a gesture to evangelicals, a voting bloc he attracted to his campaign by promising to free up their pulpits. Mr. Trump said his administration would ‘totally destroy’ the Johnson Amendment, a 1954 law that prohibits churches from endorsing or opposing political candidates at the risk of losing their tax-exempt status.”

“We in the United States, above all, must remember that lesson, for we were founded as a nation of openness to people of all beliefs. And so we must remain. Our very unity has been strengthened by our pluralism. We establish no religion in this country, we command no worship, we mandate no belief, nor will we ever. Church and state are, and must remain, separate. All are free to believe or not believe, all are free to practice a faith or not, and those who believe are free, and should be free, to speak of and act on their belief.”

He also had a thing or two to say about bigots:

“We must never remain silent in the face of bigotry. We must condemn those who seek to divide us. In all quarters and at all times, we must teach tolerance and denounce racism, anti-Semitism, and all ethnic or religious bigotry wherever they exist as unacceptable evils. We have no place for haters in America — none, whatsoever.”

Not really what we’re hearing from Trump or his supporters today. Trump’s campaign promises were a bigotry bonanza – from building a wall to enacting an immigration ban – and his supporters lapped it up.

Judging from Reagan’s 1984 words and sentiments, he must be rolling over in his grave as the party he once headed has devolved into a sexist pit of bigotry, inequality and white nationalist-supremacist hate.

***I am not nor have I ever been a fan of Reagan — in case there was any confusion.