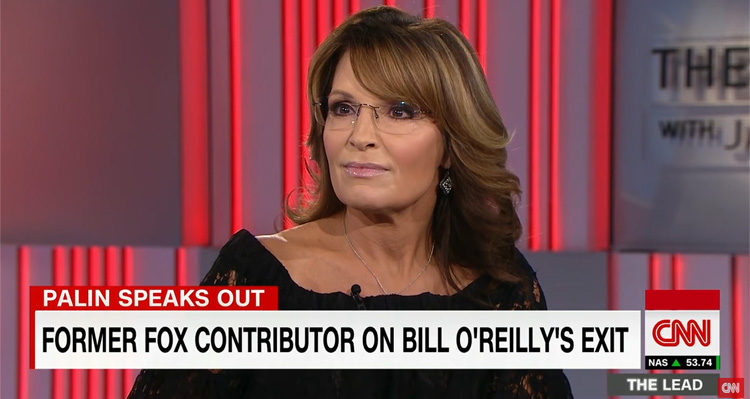 Palin, a former employee of Fox News, sat down with CNN’s Jake Tapper earlier this week to talk about Trump and his first 100 days.

Towards the end of the interview Tapper asked her about O’Reilly’s unexpected departure from Fox News earlier this week amid new allegations of inappropriate behavior by O’Reilly and a mass exodus of advertisers in the wake of a New York Times article, which revealed that host Bill O’Reilly and Fox News have paid out a total of $13 million since 2002 to five women who alleged inappropriate behavior by O’Reilly.

Continuing, she added that: “Corporate culture there obviously has to change. Women don’t deserve it, they should not ever have to put up with any kind of intimidating work space.”

However, that brief interlude with empathy immediately dissolved into victim blaming.

“At the same time, if a woman believes she is being intimidated and harassed, she needs to stand up and do something about it, not stick around for a paycheck for years and years and years and then after the fact complain about what she went through,” Palin remarked.

Concluding, she stated: “As a strong woman, I say we should feel more empowered than that and we should take a stand and get out of the place or you know, blow the whistle on whoever is the perpetrator doing the bad stuff so that the culture will change. But yeah, obviously things are changing quickly at Fox.”

Apparently proud of herself, her website published an article about the interview entitled: “Setting The Record STRAIGHT, Palin Weighs In On O’Reilly And Fox News.”

And her controversy-plagued daughter, Bristol Palin, boasted of the interview in an article published by the faith-based website Patheos titled: “What Sarah Palin REALLY thinks about Bill O’Reilly leaving Fox.”

You can watch her interview below, already cued up to the part about Fox News (at about 6 minutes and 2 seconds).