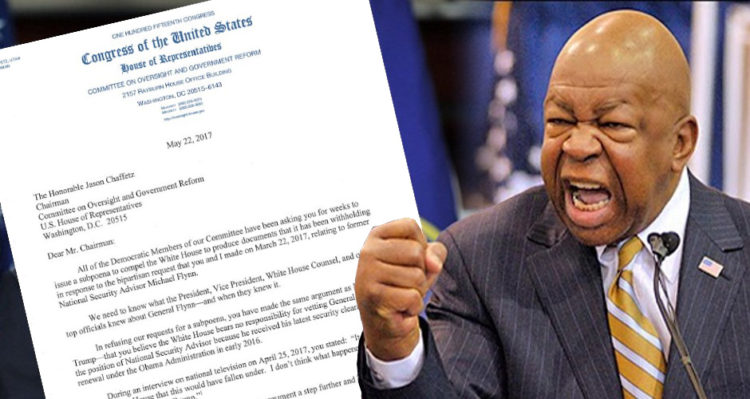 Elijah Cummings is on a roll dropping a bomb on Mike Pence last week and an even bigger one on Michael Flynn this week.

Last week Rep. Elijah Cummings, the ranking member of the House Committee on Oversight and Government Reform, dropped a huge bomb on Mike Pence’s claim that he didn’t know about Michael Flynn’s lobby efforts on behalf of the Turkish government until March.

This week he dropped, arguably, an even bigger bomb when he sent a 7-page letter to Committee Chairman Jason Chaffetz containing excerpts from an interview summary obtained by the Committee indicating that Lt. General Michael Flynn may have lied to security clearance investigators conducting Flynn’s background check in early 2016.

Democrats issued a press release containing the following excerpt from the letter. [You can read the full letter here.]

“[T]he Oversight Committee has in our possession documents that appear to indicate that General Flynn lied to the investigators who interviewed him in 2016 as part of his security clearance renewal,” Cummings wrote.

“Specifically, the Committee has obtained a Report of Investigation dated March 14, 2016, showing that General Flynn told security clearance investigators that he was paid by ‘U.S. companies’ when he traveled to Moscow in December 2015 to dine at a gala with Russian President Vladimir Putin.  The actual source of the funds for General Flynn’s trip was not a U.S. company, but the Russian media propaganda arm, RT.”

MSNBC producer Kyle Griffen posted a copy of the full letter as well:

New: Cummings letter to Chaffetz says the Cmte has docs “that appear to indicate” Flynn lied during his security clearance interview in '16. pic.twitter.com/c5iNu2MKxs

The Atlantic elaborated on the gala, reporting that:

In fact, that conference was a gala hosted by Russia Today, a state-funded TV channel, and Flynn was seated at the same table as fellow guest Vladimir Putin, the Russian president. RT paid Flynn about $45,000 through his speakers’ bureau to “dine at a gala with [Putin],” the letter said. But he apparently failed to disclose that to investigators, who wrote in the report that Flynn stated “he does not have any foreign business connections or foreign financial interests” and that “he has not received any benefit from a foreign country.”

To make matters worse, NBC News has confirmed that Flynn committed other crimes of omission, reporting that: “Separately, a U.S. official with direct knowledge told NBC News that during the same 2016 renewal process Flynn left blank a line on his security clearance form asking him to disclose any business relationships or transactions with foreign entities.”

“It was a lie of omission,” the official told NBC News.

Continuing, NBC News reports that Flynn was interviewed by the Washington Post’s Dana Priest in July 2016 and his RT appearance.

Priest replied, “Well, it’s not run by the state. You’re rolling your eyes.”

Flynn said, “Well, what’s MSNBC? I mean, come on … what’s Al Jazeera? What’s Sky News Arabia? I have been asked by multiple organizations to be a [paid] contributor but I don’t want to be.”

President Trump’s former national security adviser Michael Flynn told the Senate Intelligence Committee Monday that he won’t turn over documents related to the committee’s investigation of possible collusion between the Trump campaign and the Russian government’s efforts to sway the 2016 election.

In refusing to honor the Senate committee’s subpoena, Flynn invoked the Fifth Amendment, also known as taking the Fifth or pleading the Fifth, to justify his refusal to turn over records of his meetings with Russian officials.