" /> Even North Korea Is Mocking Trump Now - And It's Gotta Hurt 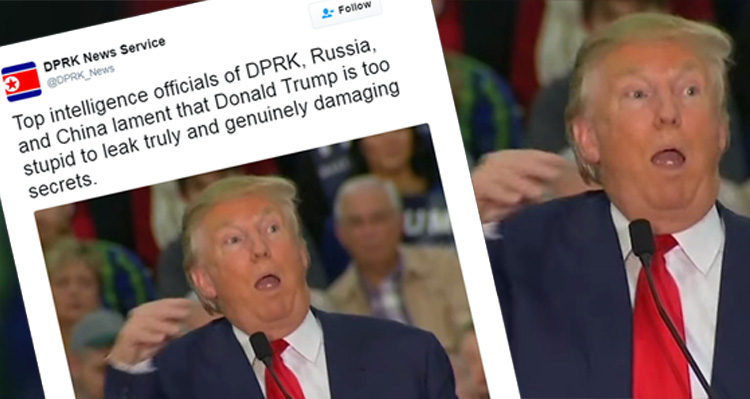 These tweets by the official North Korean News Service mocking Trump are cracking me up – but you can bet your bottom dollar that he is enraged by the mockery.

The Trump administration finds itself in the middle of a shit storm this week (not that there hasn’t been controversy and scandal raging nearly every day going deep into the 2016 presidential campaign).

Check out a few of the headlines from the last 24 hours:

I think you get the point.

Then there’s his overseas trip, scheduled to begin later this week. As Politico reports, “Trump is scheduled to depart Friday on an eight-day, five-country tour that comes at a moment of major turmoil in his administration.”

As as one might expect, the headlines surrounding that trip are equally grim:

The past 24 hours have been interesting on Twitter as well with a Twitter-Storm igniting over Trump’s Tuesday morning tweets admitting that he had share highly classified information with Russian diplomats.

Celebrities, journalists, politicians, and ordinary concerned citizens took to Twitter in droves to criticize Trump in the wake of growing scandals; and the official news service for the Democratic People’s Republic of Korea (DPRK – otherwise known as North Korea) has joined in the fray with some tweets that are at once entertaining, interesting, hilarious, and sad.

Here are a few examples taken from the last 24 hours:

US secret police boss blasted as traitor for taking notes of Donald Trump.

Donald Trump speeches in Vatican and Saudi Arabia expected to produce many penetrating insights into theological questions of the age. pic.twitter.com/MQoXXzRC5t