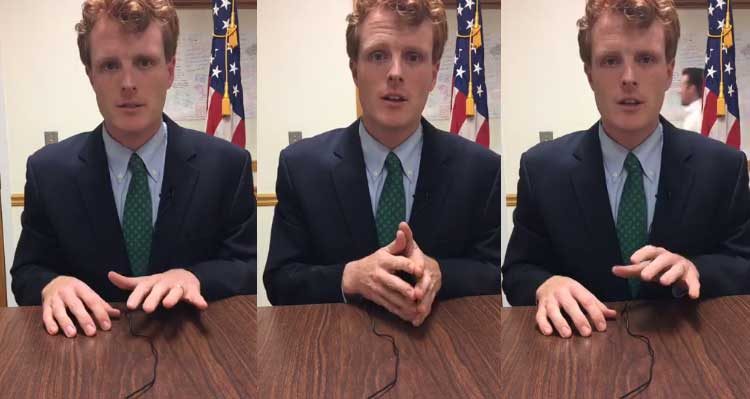 Watch as Congressman Joe Kennedy III lays out the Trump-Russia scandal in 3 minutes and calls on the GOP to start putting the republic over Republicans.

There has been little doubt that he is living up to the liberal ideals associated with his family name and Wednesday was no exception, when he aired a live analysis of the Trump-Russia scandal on his Facebook page.

He prefaced the video with the following introductory text:

Russia interfered in our election not only to erode faith in this democracy — but to undermine the institutions that protect its integrity. With every reckless act of self-preservation, President Trump is allowing that distrust to fester and grow. Only an independent investigation can restore accountability to the American people. If the Trump Administration has nothing to hide, they have nothing to fear.

“Hey everybody, and thank you so much for continuing to raise your voice,” he starts before moving on to his analysis of “the facts.”

He goes on to detail the shake-ups surrounding the scandal such as AG Jeff Sessions being forced to “recuse himself from an investigation about/into the Trump administration’s contact with Russia,” embattled House Intelligence Committee Chairman Rep. Devin Nunes stepping down from that panel’s Russia investigation.

Continuing, he states that: “We’ve seen resignations and dismissals of high-ranking campaign officials and Trump associates from Paul Manfort to Carter Page and of course, Michael Flynn, the former National Security Adviser, after he lied to the Vice President of the United States, who then, based off of that false information mislead, unwittingly, mislead the American public.”

“Far more troubling than those facts,” he continues, “are the dismissals of Sally Yates, then acting Attorney General, “Preet” Bharara, former U.S. Attorney General for New York, and of course, Director James Comey, head of the FBI, the person leading the investigation into Donald Trump and his associates’ interactions and alleged interactions with Russia.”

Continuing, he explains that: “Russia’s goal from the beginning was to erode our faith in institutions and our country, our democracy, and the mechanisms we have, in order to protect our democracy. What we have seen, and every day since then, in all these questions as they continue to swirl, is that they continue to make that success because this administration refuses to come clean and answer basic questions with regards to their own actions, with that of a known adversary and our chief political rival around the world.”

He then lists 6 things that “the American public should expect from their government.”

Directing his attention to Trump, he asks “why is it that you continue to cozy up to a Russian government that does not share our values or our interests, while alienating some of our closet allies around the world?”

He goes on to call for an independent investigation into the Russia scandal, stating that “only an independent commission with the full staff, and support and subpoena power that is necessary, is going to get us to where we need to go.”

Continuing he urges the Trump “administration and our Republicans in Congress to stand up and speak out and look at this as it is — as a national security issue. It’s a threat against our democracy, our nation and our values, and it is only through standing up, raising our voices and being united—that we going to be able to repel this threat.”

He concludes his remarks by addressing the American people, stating that “ultimately, this is going to come down to all of you.”

Raise your voices, particularly during a recess period when the House is back home, hopefully conducting those town halls and answering your questions. And if they’re not, make sure you raise your voices so they hear you, they answer—and we can hold our government accountable.

Thank you, so much — keep those voices raised.