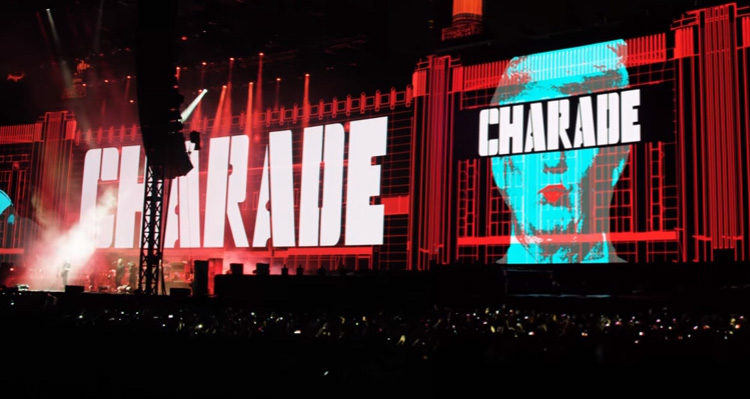 Roger Waters emasculates Trump during performances of Pink Floyd’s “Pigs (Three Different Ones)” displaying doctored images of Trump along with some of his most heinous quotes.

Roger Waters, the legendary co-founder of Pink Floyd, is calling out Trump for his outrageous displays of bigotry, greed and hatred as part of his upcoming world tour.

As Rolling Stone reports, “Waters staged a stunning Trump takedown during his performance of Pink Floyd’s ‘Pigs (Three Different Ones)’ at a rehearsal… for his upcoming Us + Them Tour,” at East Rutherford, New Jersey’s Meadowlands Arena on May 21, 2017.

During the 11-minute Animals song, screens that bisected the small crowd that the singer later described as “friends and family” displayed doctored images of the president in bright, Warhol-like colors depicting him with lipstick, with breasts, with a Klan hood, without pants (showing a tiny penis), with his head on a pig and with the word “charade” (referencing a lyric in the song) written over his face.

The show also include a “giant, flying, drone-controlled pig” who flew around on the screen with the words “Welcome to the Machine” written on it along with an altered image of Trump “with dollar signs over his eyes and a word bubble saying, “I won!” according to Rolling Stone.

Continuing, Rolling Stone reports that later in the song,

[T]he screens displayed some of Trump’s most heinous quotes about his proposed border wall, 9/11, taxes, women, his daughter Ivanka and more before running the words ‘Fuck Trump’ the length of East Rutherford, New Jersey’s Meadowlands Arena in a stunning affront to the president. He also continued with Trump-related imagery in “Money,” and used “Us and Them” to showcase a world at odds with each other.

[You can click here to view a video of the rehearsal taken by an audience member.]

In late February 2017, Waters told Rolling Stone that the Us + Them tour would be “an exercise in resistance, not just to Trump, but to all the despots, dictators, thieves and ne’er-do-wells all over the world.”

This isn’t the first time Waters has spoken out about Trump. In a September 2015 interview with Rolling Stone, Waters called Trump “pig ignorant.”

Waters admits he has been amused by Trump’s ideas, but only to a point. “I have [laughed] except it’s not funny that he’s as popular as he is,” Waters says. “His ideas [are] not outlandish at all. It’s American exceptionalism gone crazy and delivered under the umbrella of absolute ignorance. He is pig-ignorant and he always was and he always will be. He lives in the illusion that he’s admirable in some way. And obviously for somebody like me, he stands for everything that is not admirable in American society.”

Trump has been campaigning across the country with the slogan “Let’s Make America Great Again,” an idea Waters takes exception to. “‘It’s the worst possible slogan anybody could ever come up with,” he says. “It’s silly and disgusting as well, unless they wanted to hark back to the potential. If the Founding Fathers hadn’t been so up their own asses, they might have come up with a system that fell somewhere between republican democracy that was going to work and that had proper checks and balances to prevent it disintegrating into what it has become, which is a country for sale to the highest bidder with the Supreme Court at the top of it, who’s appointed by the highest bidder eventually.”

He has also used “Pigs (Three Different Ones)” before to lash out at Trump, such as when Waters performed the piece on October 1, 2016 before a crowd of 300,000 in Mexico City’s Zócalo Square using similar imagery and a giant drone-controlled pig that floated around the audience. [See the video below.]

As with the Meadowlands Arena rehearsal earlier this month, the performance ended with a series of heinous Trump quotes taking up the entire screen, one at a time in Spanish. A sampling of the quotes includes:

The Mexico City performance ended with “Trump eres un pendejo,” [“Trump, you are an idiot” in English] taking up the entire screen.