In An Act Of Sheer Stupidity, Trump Inadvertently Launches A War On Coal 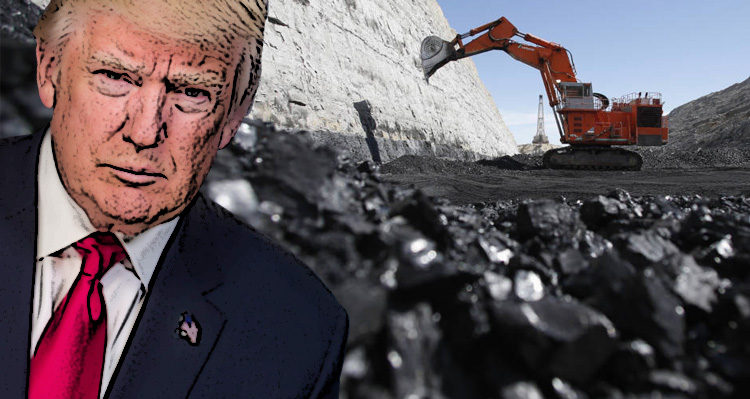 In provoking a trade war with Canada, Trump stupidly has started his own War on Coal.

Trump promised to end the War on Coal, but due to stupidity, arrogance or ignorance – he may have just destroyed the coal industry, single-handed.

The Sierra Club reports that last week, “Trump imposed tariffs of up to 24 percent on imports of Canadian softwood lumber,” at the urging of the U.S. timber industry.

“The issue of Canadian lumber imports has been vexed for years,” the Sierra Club continued, and the following day “Prime Minister Justin Trudeau promised to stand up for Canada’s lumber industry, warning, ‘You cannot thicken this border without hurting people on both sides of it.'”

Last Friday, British Columbia Premier Christy Clark tweeted that “It’s time to ban thermal coal from BC ports” along with a photograph of a letter she sent to Trudeau.

As the British Columbia Liberals website reports, Clark wrote Prime Minister Trudeau “to ask the federal government to ban the shipment of thermal coal, including U.S. shipments, through British Columbia – sending a strong message that BC and Canada will protect the interests of workers in forestry and other sectors targeted by the Trump administration.”

In her letter she wrote that trading relations is changing for the worse under the Trump administration:

For many years, a high volume of U.S. thermal coal has been shipped through BC on its way to Asia. It’s not good for the environment, but friends and trading partners cooperate. So we haven’t pressed the issue with the federal government that regulates the port.

Clearly, the United States is taking a different approach. So, I am writing you today to ban the shipment of thermal coal from BC ports.

She also wrote of the success of the Beyond Coal movement in shutting down coal terminals on the U.S. Pacific Coast:

As you may know, over the past five years, every proposed coal export facility on the West Coast of the United States has been rejected or withdrawn, typically as a result of ecological or environmental concerns. . . . Oregon, Washington, and California have all made significant commitments to eliminate the use of coal as a source of electricity for their citizens. In fact, in August 2016, Governor Jerry Brown of California signed Bill 1279 that banned the provision of any state transportation funding for new coal export terminals.

As The Sierra Club notes, “Due to the lack of U.S. terminals, Clark says, U.S. exports through Canada have been increasing. Last year, she says, 6.2 million tons of U.S. thermal coal moved through the Port of Vancouver, and the number was expected to increase in the future.”

“In provoking a trade war with our erstwhile friends and neighbors to the north, Donald Trump has started his own War on Coal,” the Sierra Club concluded.

Clark, who is currently campaigning for re-election, spoke of her letter and Trump’s trade war during a campaign stop last week, according to the website Mining.com.

Mining.com adds that she will take matters into her own hands if the federal government decides not to impose her requested ban on coal exports:

A provincial premier does not have the power to effect trade through ports, which are a federal responsibility. However, the suggestion is likely to vetted through the most senior levels of Canadian government. The Prime Minister’s Office issued a non-committal response to Clark’s suggestion, saying only that “We consider carefully and seriously any request from a premier.” Clark, who is seeking a second term in office as B.C. premier, later said that B.C. could “go it alone” if the feds fail to act, such as imposing a heavy tax on coal shipments.

Canada’s The Globe and Mail reports that: Kevin Washbrook, the B.C.-based director of Voters Taking Action on Climate Change, says that Clark is right to complain about coal producers exporting through B.C. ports.

“Alberta is phasing out the use of thermal coal because it isn’t safe to use at home and because of the impacts on our health and on our climate, so what are we doing exporting it? It’s immoral for Canada to be exporting it to other countries,” Washbrook said in a Sunday interview, adding “If Mr. Trudeau is serious about climate change, he needs to seize the moment. Thermal coal is the new asbestos.”

We’ve asked Prime Minister Justin Trudeau to ban thermal coal from our ports. If Ottawa won’t take action, we will, imposing a levy on thermal coal making it uncompetitive to ship.

Now’s the time to be strong – because Donald Trump has launched an attack on BC workers. Together, let’s stand up for BC.

“Now is the right time to do it, the right time to send a strong message to the Trump administration and U.S. lumber barons that we will not back down in the face of their aggressive attacks on workers here in British Columbia,” said Clark.

The Global News adds that:

If the federal government doesn’t act on her request to ban the coal, she said the Liberals would develop regulations that impose a carbon price of about $70 per tonne if they are re-elected in the May 9 election.

“The levy would make thermal coal shipped through British Columbia utterly uncompetitive in the global market,” she said while campaigning in Merritt.