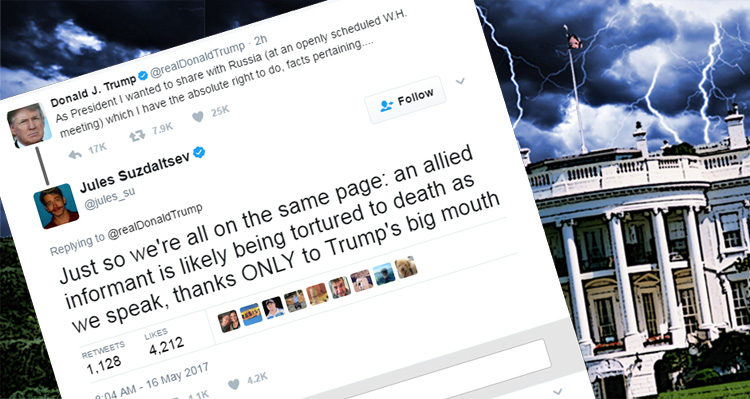 Twitter users respond with rage and horror to Trump’s early morning admission that he did, in fact, share highly classified information with Russian diplomats last week.

The White House, “already in near-perpetual crisis management mode, scrambled again Monday night to respond to yet another explosive allegation,” according to a report by NBC News.

As seems to be the norm, Trump turned to twitter Tuesday morning to mount a defense and to deflect blame onto others, such as former FBI Director James Comey – who Trump, by his own admission, fired last week over the ongoing investigating surrounding Russia’s interference in the 2016 election.

Trump began by tweeting: “As President I wanted to share with Russia (at an openly scheduled W.H. meeting) which I have the absolute right to do, facts pertaining to terrorism and airline flight safety. Humanitarian reasons, plus I want Russia to greatly step up their fight against ISIS & terrorism.”

As President I wanted to share with Russia (at an openly scheduled W.H. meeting) which I have the absolute right to do, facts pertaining….

…to terrorism and airline flight safety. Humanitarian reasons, plus I want Russia to greatly step up their fight against ISIS & terrorism.

He then seemed to be attempting to deflect blame over to former FBI Director James Comey – whom Trump fired last week, by his own admission, over the ongoing investigation surrounding Russia’s interference in the 2016 election.

He posted one tweet followed by five periods which usually indicates more tweets to come, but at the time of publication he has yet to follow up.

I have been asking Director Comey & others, from the beginning of my administration, to find the LEAKERS in the intelligence community…..

Twitter was quick to respond with some users posting detailed multi-part responses, such as filmmaker Adam West, who tweeted the following stream of responses pointing out that the underlying problem with Trump is his tendency to brag.

He also draws a comparison between Trump boasting to Russian diplomats and his now infamous lewd “Access Hollywood” interview with Billy Bush that stirred up controversy and rage during the 2016 campaign.

“Trump criticized Obama over telegraphing strategy. Here he is spilling secrets to Russians like they gave him truth syrum. [sp] It’s no different than bragging to Billy Bush on the bus. Except this dick-measuring contest jeopardizes national security. 45 is a compulsive bragger. Foolishly boasts to make himself look stronger momentarily. Often politically stupid long term. The Donald’s lack of impulse control has now threatened our efforts against ISIS. Who he said he’d defeat fast. McMaster’s word games are just a more credible than usual attempt at Trumpian alternative facts. New look, same BS. Trump has the foreign-policy strategy of an immoral fourth grader: Treat bad guys good, good guys bad.”

@realDonaldTrump Trump criticized Obama over telegraphing strategy. Here he is spilling secrets to Russians like they gave him truth syrum.

Others expressed dismay that Trump actually admitted he had shared the information with Russia:

Others, such as VICE and Discovery contributor Jules Suzdaltsev, speculated about the real world consequences of Trump’s disclosure.

“Just so we’re all on the same page: an allied informant is likely being tortured to death as we speak, thanks ONLY to Trump’s big mouth,” he began, adding: “What’s more, Trump’s disclosure has shown allies that whatever they tell him, he WILL tell Putin. Say bye-bye to intel that keeps us safe.”

You’ve done more damage to the United States, it’s citizens, it’s international standing, and our safety than ISIS could have ‘dreamed’ of. Can you believe it’s still only May and we’ve been calling for your resignation since hour one!? You haven’t “screwed the pooch”, you are “f***ing the dog in the @ss”. Can’t wait for a bunch of idiot hypocrite Trumpettes to come running to say I’m being too vulgar about the Pussy-Grabber-in-Chief. Honestly if you’re too dumb to see what the President is doing, you deserve the ridicule. Shame on you Trump, and shame on your supporters. Mostly shame on Trumpettes. I’m still pretty sure Trump thinks this is all an elaborate rich guy birthday scavenger hunt. Maybe it is?

@realDonaldTrump Just so we're all on the same page: an allied informant is likely being tortured to death as we speak, thanks ONLY to Trump's big mouth

Rocket scientist, author and inventor Robert J. Szczerba weighed in as well with a set of tweets.

“By betraying the confidence of our allies (all because of your ego), you likely put many lives in jeopardy,” he began. “You gave highly classified information to the Russians all because you wanted to show off … this is incredibly disturbing. I’m sure your staff is cringing now that they see your daily twitter rant is beginning.

@realDonaldTrump You gave highly classified information to the Russians all because you wanted to show off … this is incredibly disturbing.

Others speculated that Trump is in “meltdown” mode that his staff took his cell phone from him over the weekend in an attempt to stop his tweets.

@RJSzczerba @realDonaldTrump I think this is why we've had silence for several days. He's in meltdown mode.

@RJSzczerba @realDonaldTrump Think they took his phone away from him over the weekend.