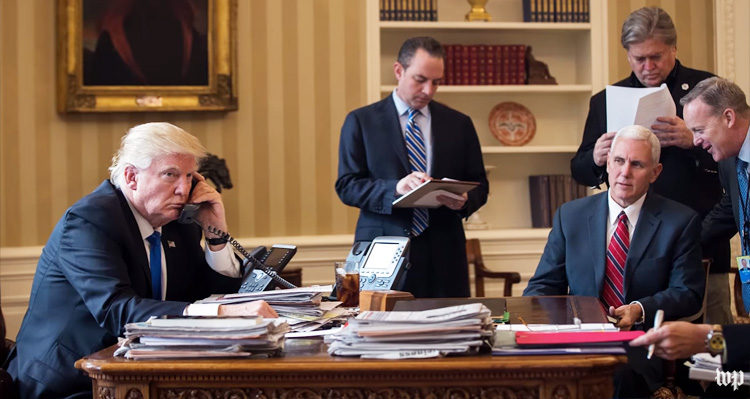 The Trump administration actively sought the aid of high ranking intelligence sources and key members of Congress to counter the Russia scandal and related investigations.

In light of recent developments, such as the recent firing of the FBI director, this article takes on more relevance today than at the time of publication.

“The Trump administration has enlisted senior members of the intelligence community and Congress in efforts to counter news stories about Trump associates’ ties to Russia,” the article begins, adding that: “Acting at the behest of the White House, the officials made calls to news organizations” in an attempt “to challenge stories about alleged contacts between members of President Trump’s campaign team and Russian intelligence operatives, U.S. officials said.”

Continuing, The Washington Post reported that: “The calls were orchestrated by the White House after unsuccessful attempts by the administration to get senior FBI officials to speak with news organizations and dispute the accuracy of stories on the alleged contacts with Russia.”

White House spokesman Sean Spicer confirmed that the White House communicated with officials with the aim of contesting reporting on Russia, but maintained that the administration did nothing improper. “When informed by the FBI that [the ­Russia-related reporting] was false, we told reporters who else they should contact to corroborate the FBI’s version of the story,” he said.

Getting down to specifics, The Washington Post reported that the efforts to reach out to senior lawmakers included the chairmen of the Senate and House intelligence committees Sen. Richard Burr (R-NC) and Rep. Devin Nunes (R-CA).

A spokesman for Nunes said that he had already begun speaking to reporters to challenge the story and that, “at the request of a White House communications aide, Chairman Nunes then spoke to an additional reporter and delivered the same message.”

In an interview, Burr acknowledged that he “had conversations about” Russia-related news reports with the White House and engaged with news organizations to dispute articles by the New York Times and CNN that alleged “repeated” or “constant” contact between Trump campaign members and Russian intelligence operatives.

Fast-forwarding to April, facing an ethics inquiry, Rep. Nunes temporarily stepped down from his position as head of the House Intelligence Committee.

Facing a firestorm of criticism that he is running political interference on behalf of the Trump administration, House Intelligence Committee Chairman Devin Nunes (R-CA) said Thursday he is temporarily stepping back from leading the panel’s investigation of the Russian campaign to meddle in the U.S. election.

In a statement Thursday, Nunes said that he will hand over leadership of the probe to Rep. Mike Conaway (R-TX), with the aid of Reps. Trey Gowdy (R-SC) and Tom Rooney (R-FL), while the chairman is investigated by the Office of Congressional Ethics.

The Committee is aware of public allegations that Representative Devin Nunes may have made unauthorized disclosures of classified information, in violation of House Rules, law, regulations, or other standards of conduct. The Committee, pursuant to Committee Rule 18(a), is investigating and gathering more information regarding these allegations.

Last week, things came to a head with the FBI when Trump summarily fired Director James Comey on Tuesday.

As The Guardian reported last Friday, Trump “said he was thinking of ‘this Russia thing’ when he decided James Comey’s fate – contradicting the White House rationale that he fired the FBI director for mishandling the Clinton email investigation.”

Defending that decision in an interview on NBC News on Thursday, Trump said: “And, in fact, when I decided to just do it, I said to myself, I said: ‘You know, this Russia thing with Trump and Russia is a made up story, it’s an excuse by the Democrats for having lost an election that they should’ve won.’”

NBC News reported last week that Trump also told host Lester Holt that he asked Comey if he was under investigation for alleged ties to Russia.

“I actually asked him” if I were under investigation, Trump said, noting that he spoke with Comey once over dinner and twice by phone.

“I said, if it’s possible would you let me know, am I under investigation?”

NBC News elaborated over that dinner in a subsequent article, reporting that there was some dispute over the circumstances of that meeting between Comey and Trump.

One day after the acting attorney general warned the White House that its national security adviser was subject to blackmail, the president summoned the FBI director to dinner at the White House, people close to James Comey told NBC News.

At the Jan. 27 dinner, a week after assuming the presidency, Trump requested a loyalty pledge from Comey, people familiar with the dinner say. Comey replied that he could not offer loyalty, but he could pledge his honesty.

Continuing, NBC News reports that although Trump claimed that Comey had requested the meeting during his interview with Lester Holt, others – such as James Clapper, who retired as Director of National Intelligence in January – are disputing that claim.

James Clapper, who retired in January as director of national intelligence, told NBC’s Andrea Mitchell that Comey told him on the night of the dinner the president had invited him — and he was uneasy about it.

“He mentioned that he had been invited to the White House to have dinner with the president and he was uneasy with that,” Clapper said, adding that Comey didn’t want to create “the appearance of compromising the integrity of the FBI.”

Other officials confirm Clapper’s account according to the NBC News report:

A current FBI official and others close to Comey confirmed that the director did not request the one-on-one dinner, which happened at the White House a few days after Trump was sworn in.

“The president is not correct,” the former official said. “The White House called [Comey] out of the blue. Comey didn’t want to do it. He didn’t even want the rank and file at the FBI to know about it.”

But in the end, “He’s still the commander-in-chief. He’s your boss. How do you say no?”

You can watch the Washington Post video below and be sure to share your thoughts on the growing Russia scandal and mounting allegations that Trump is actively attempting to obstruct the investigations.