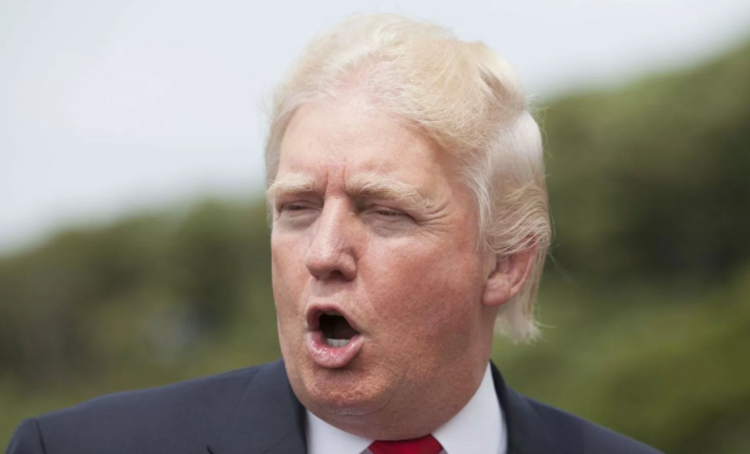 It doesn’t seem possible that you were inaugurated just five short months ago. So much has happened since January 20, 2017, and it’s been one crazy, odious ride.

I remember watching the results come in on election night and experiencing shock, disgust and legitimate terror – not because you were a “Republican” but because your campaign was revolting. I honestly believed Republican evangelicals would have bailed on you after the Access Hollywood tape revealed you enjoy assaulting women and then bragging about it. I was mistaken.

Watching the returns on November 8 was physically and emotionally draining. My stomach churned. I felt as if I were living in a nightmare, and I was desperate to wake up. It was one of the worst evenings I’ve ever experienced. Again, it wasn’t because of the “R” behind your name (you’re not really Republican anyway — the only ideology you subscribe to is what’s good for Trump). I’ll readily admit that a Republican victory would have been upsetting, but you’re worse than any Republican I’ve ever seen – including Ted Cruz. And that’s saying something.

As the reality set in, I was never able to fully process what was about to come. I focused on the fact that America still had about two more months before you were sworn in and maybe, hopefully, a miracle would happen. Alas, no miracles occurred; and on January 20, you became the 45th president of the United States as the world watched in horror.

Even though the general public had yet to fully realize your unapologetic master/servant relationship with Vladimir Putin, your questionable financial deals with the Russians, and that you would elevate to cabinet positions former campaign surrogates who would lie about secret meetings with Russian officials, citizens all over the planet had already planned to protest your illegitimate “win.”

Your deranged insistence that your inaugural crowd was bigger than any other POTUS was not only startling and flat out wrong, it was our first real glimpse into your extremely fragile male ego. On the campaign trail, you’d been lulled into a false sense of security and clearly believed that the rabid, violent deplorables who attended your rallies were an accurate representation of the entire American population. In this case, Donald, you’re the one who was mistaken.

On January 21, 2017, the largest protest in world history happened because of you. Millions of women and men in nations all over the globe marched in protest of you, Donald. What made the marches even more gratifying was the fact they were the brainchild of a woman. No matter how you or your loyal cult-like supporters paint it, the marches weren’t solely about reproductive justice; the marches were a message to you – that you and your hateful agenda will not be tolerated – that the world would resist you and your illegitimacy. That day gave me and millions of other people a glimmer of hope in what appeared to be a doomed situation.

Now, only five months into your illegitimate presidency, you’re under investigation for obstruction of justice. Wow. Not only that, you’re obviously incapable of handling what’s happening without barfing your insecurities all over Twitter – and in the process, digging that hole you’re in deeper. Additionally, you and your campaign buddies are also under investigation because of your suspicious dealings with Russia.

In January, like so many others, I was sick to my stomach with fear. Every day you’re in office, damage to this flawed but great country is being done by your crooked administration. But I’m starting to feel like justice will prevail because, despite your obvious obstruction, lies and bloviating BS, American justice seems to be working.

You can order Rod Rosenstein to fire Special Prosecutor Mueller and if he refuses, you can fire Rosenstein and continue believing that being president is just like running a private company where you’re the dictator, but that’s not going to save your sorry, old, oversized ass. Lady Liberty has no patience for pussy-grabbing Russian sympathizers who take orders from Putin. We The People are not going to let you get away with this, Donald.

Sooner or later your little house of cards will be hit with a giant gust of wind and your pouty daughter-wife, Ivanka, won’t be able to successfully spin it in your favor no matter how many times she sits on the Fox and Friends couch feigning surprise at all the anger coming your way.

Robert Mueller isn’t playing around; and while you’re busy tweeting nonsense about witch hunts, evidence is being gathered that will prove you are the criminal we all know you are.  If you’re fortunate enough to survive this investigation without landing in jail, I’m comforted in the knowledge that you are hated all over the world, and your last years on this planet will be uncomfortable at best.

While I’m still fearful about the extent of damage you’ll cause before your crushing demise, I want you to know, Donald, that you’re not going to get away with your crimes. No matter how many crybaby tweets, no matter how many in your dwindling base support you, your time in the Oval Office is limited — and I’m sure I’m not alone in taking delight in the notion that the Trump/Russia walls are closing in. You simply don’t have the ability or the mental faculties to stop the impending doom you’re about to face.

You’re an unwelcome test for this country’s strength. The country will win and you will, without question, lose. This is my comfort.