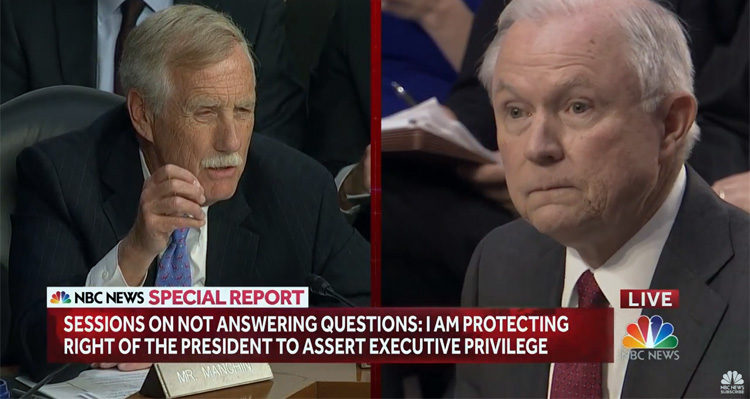 Jeff Sessions gets schooled on legal precedent by Senate Democrats for obstructing their investigation into Russian meddling into the U.S. election.

Having fully documented the areas of concern as events unfold, Comey’s testimony was clear, concise and exact. While there were areas in which Comey refused to answer questions in a public hearing, he confirmed to Senators that he would answer all questions in a closed session.

By contrast, Sessions relied on vague answers stating I have wracked my brain, I don’t recall, I have no recollection, I don’t remember…

Asked if he would provide documents to include personal notes and emails to corroborate his answers, Sessions repeatedly replied “as appropriate,” refusing to give a definitive answer as to what that means.

Sessions invoked privilege on several instances, denying that he – in fact – was invoking privilege. He claimed in some instances that a “longstanding Dept. of Justice policy” supported his refusal to answer questions and in other instances claimed his was acting to preserve Trump’s right to invoke executive privilege in the future.

As The Guardian reports, Harris asked Sessions if he “reviewed with lawyers the law regarding what he can and can’t share.”

Sessions appeared defensive, angry, confrontational throughout the hearing, with Democratic members of the committee expressing frustration with his testimony. He also appeared to be doing his best to use up the clock to limit questions raised by Democrats.

While Republicans did their best to try to help Session portray the Trump administration in the most positive light possible, Democratic members of the committee such as Senators Ron Wyden of Oregon, Martin Heinrich of New Mexico, Angus King of Maine, Kamala Harris of California, and Joe Manchin of West Virginia ripped AG Sessions, accusing him of deliberately obstructing the Senate investigation through his failure – or refusal – to answer questions.

All-in-all, it would appear that Sessions’ testimony did much more harm that good for the Trump administration, although only time will truly tell the outcome of the Trump-Russia scandal.