Trump Accidentally Destroys His Own Legal Argument For His Travel Ban 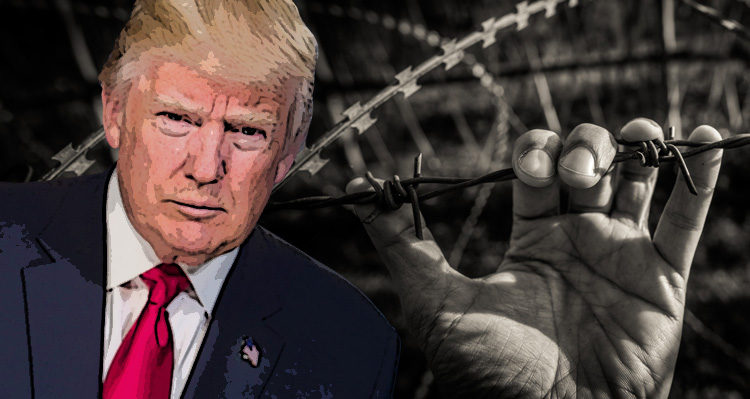 Trump invalidates his own legal defense for his travel ban while attempting to use the London terror attack to promote his bigoted political agenda.

As the Chicago Tribune reports:

The Justice Department on Thursday formally asked the Supreme Court to let a ban on visitors from six mostly Muslim countries and refugees from around the world to be put in place. The high court also is being asked to uphold the constitutionality of the Trump travel policy, which lower courts have blocked because it shows anti-Muslim prejudice.

The Trump administration along with its surrogates have been arguing that Trump’s travel policy is not a travel ban, rather it is a “pause.”

Continuing, the Chicago Tribune reports that:

“The courts below openly second-guessed the president’s finding that those conditions and risks provided the basis for … [the[ temporary pause,” Wall wrote in his filing. [emphasis added]

Talking with Fox News Sunday over the weekend about the Manchester suicide bombing, Homeland Security Secretary John Kelly confirmed the Trump administration’s position that travel policy is a pause.

The fact is that in those countries, we have very little ability to actually verify, vet the people that are coming out of those countries. So, what the president and it’s not a travel ban, remember. It’s the travel pause. What the president said, for 90 days, we were going to pause in terms of people from those countries coming to the United States that would give me time to look at additional vetting to see. [emphasis added]

In the wake of Saturday’s tragic terrorist attack in London, Trump took to Twitter seeking to exploit that tragedy to further his political agenda at home to include his travel policy.

One tweet in particular caught the attention of several individuals to include the American Civil Liberties Union (ACLU).

“We need to be smart, vigilant and tough. We need the courts to give us back our rights. We need the Travel Ban as an extra level of safety!” Trump tweeted.

We need to be smart, vigilant and tough. We need the courts to give us back our rights. We need the Travel Ban as an extra level of safety!

As NBC News reports, “The American Civil Liberties Union, which is representing a group of refugee aid organizations and Muslim residents whose overseas relatives are seeking visas, responded to Trump’s tweet about the executive order by pointing out that the president used the word ‘ban.'”

Glad we both agree the ban is a ban. https://t.co/p1qXkffyIL

Cecillia Wang, the Deputy Legal Director for the National ACLU, added her own response, tweeting: “We need to be outraged when the president exploits a terrible violent crime to push his discriminatory and illegal policy.”

We need to be outraged when the president exploits a terrible violent crime to push his discriminatory and illegal policy. https://t.co/fcEi6WPmlv

Not yet satisfied, Trump set of a new Twitter-storm on Monday about his travel ban, doubling down on his weekend tweet saying it was indeed a “ban.”

People, the lawyers and the courts can call it whatever they want, but I am calling it what we need and what it is, a TRAVEL BAN!