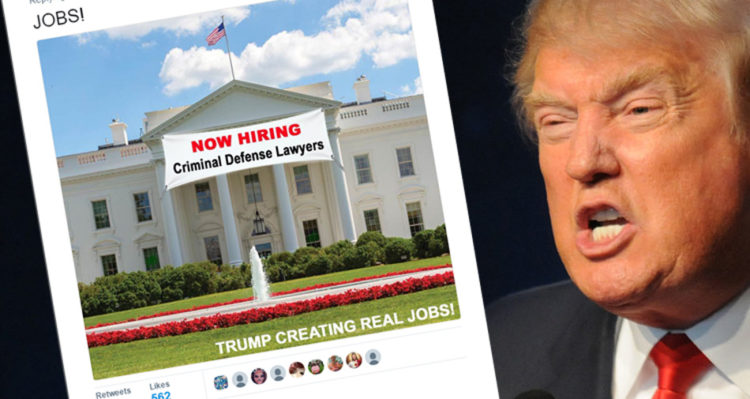 Trump manages to humiliate himself once again on Twitter – this time admitting he is under investigation by the FBI.

One would think that Trump would try to lay low after the last couple of weeks of testimony, controversy and embarrassment. But no – he continues his pattern of taking to Twitter to make things worse.

Earlier this week, Trump was mercilessly mocked after he had an embarrassing early morning Twitter tantrum in the wake of a report by the Washington Post that Robert Mueller, the special counsel overseeing the Russia investigation, is now looking into the possibility that Trump attempted to obstruct justice.

A seemingly panic stricken Trump took to Twitter the following day, lashing out at “Crooked H” [Hillary] in an apparent public temper tantrum [like we have never seen any of those from him before….].

“Why is that Hillary Clintons family and Dems dealings with Russia are not looked at, but my non-dealings are?” his first tweet read, followed by “Crooked H destroyed phones w/ hammer, ‘bleached’ emails, & had husband meet w/AG days before she was cleared- & they talk about obstruction?“

Seeming to be a glutton for punishment, Trump took to Twitter again Friday morning, tweeting: “After 7 months of investigations & committee hearings about my ‘collusion with the Russians,; nobody has been able to show any proof. Sad!“

A little more than an hour later, and Trump posted a tweet admitting that he is under FBI investigation.

As NBC News reports: “Trump may have been referring to Deputy Attorney General Rod Rosenstein, who wrote a highly critical memo about Comey last month. In separate closed-door meetings with the House and the Senate, Rosenstein said his memo was ‘not a statement of reasons to justify a for-cause termination.'”

Twitter was quick to respond to Trump’s rather stunning – as well as confusing – admission.

While several noted individuals blasted Trump over his tweet, David Nussbaum, the chief executive of the WWF-UK (World Wide Fund for Nature) and CEO of The Elders, had one of the most thorough responses with a series of tweets:

Neuroscientist and contributor to numerous periodicals such as Forbes, Economic Times, NPR, and Medium Anirvan Ghosh tweeted the following observations:

In a post that may or may not have been in direct response to Trump’s tweet, John Fugelsang tweeted: “Trump promised to create tons of new jobs; we just didn’t know they would all be for criminal defense attorneys.”

There are several other insightful observations posted in response to Trump’s tweet – too many to list here – so be sure to head over to his post on Twitter and check them out for yourself.