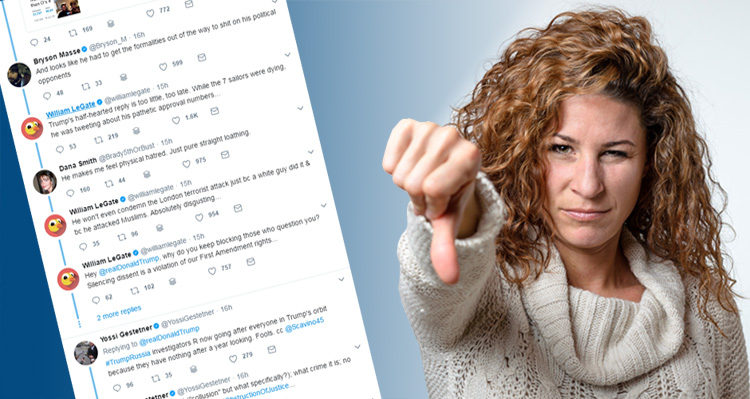 Seeming to forget his own policies and promises, Trump takes to Twitter to once again make a fool out of himself.

To say hypocrisy abounds in Trumplandia would be a gross understatement.

Monday evening, Trump tweeted his condolences to the 7 sailors who lost their lives on the U.S.S. Fitzgerald after it crashed with a Philippine flagged container ship near Japan.

“My heartfelt thoughts and prayers are with the 7 @USNavy sailors of the #USSFitzgerald and their families,” Trump tweeted seeming to forget his cruel stance on immigration as those sailors illustrate the Navy’s reliance on immigrant groups.

Noting that “The roll call of the dead… illustrated the degree to which the military relies on recruits from immigrant communities around the country,” MSN News reports that:

The seven sailors who died when the U.S.S. Fitzgerald collided with a container ship last weekend were a snapshot of the nation they served: an immigrant from the Philippines whose father served in the Navy before him; a poor teenager whose Guatemalan family came north eager for opportunity; a native of Vietnam hoping to help his family.

Then there is the fact it took him two days to acknowledge the tragic loss of those sailors and his complete silence on the attack on a London mosque and the murder of a Muslim teenager in Virginia.

As the Independent reports,

Trump has failed to personally acknowledge the attack on members of a mosque in London, and the murder of a Muslim teenager in Virginia, prompting critics to attack his silence.

The White House has commented on the Finsbury Park attack, saying that they have reached out and offered to help in any way possible. But Mr Trump himself has not commented directly, instead taking to Twitter to attack Democrats and endorse Republican candidates.

The President’s critics have argued that while he is often quick to condemn acts of terrorism carried out by Muslims, his reaction to terrorism committed by white people is anything but swift.

Several individuals took to Twitter questioning Trump’s failure to respond. “Nothing from Trump,” the writer and activist Shaun King tweeted in response to Canadian Prime Minister Justin Trudeau’s condolences to London. “[He] tends to generally not mind when white men kill or maim people — particularly if they kill Muslims”.

Nothing from Trump, though.

Trump tends to generally not mind when white men kill or maim people – particularly if they kill Muslims. https://t.co/Hhkxebm3v6

Others called out Trump for his delayed response to the U.S.S. Fitzgerald tragedy.