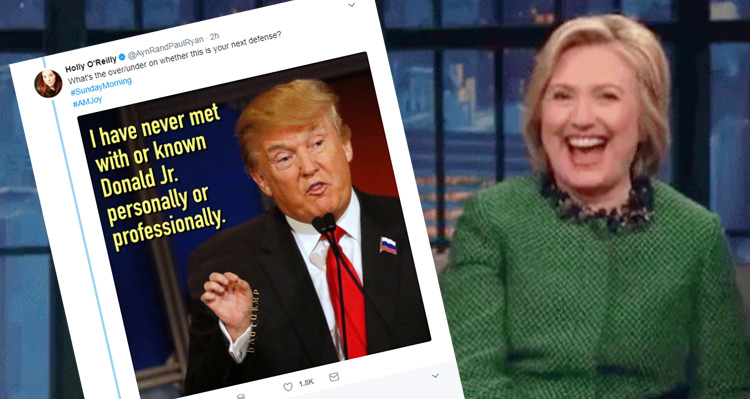 Trump reached for his smart phone Sunday morning, attempting to deflect attention from the week-long fallout from the stunning report last Saturday by the New York Times revealing that Donald Trump, Jr. met with a Kremlin-connected attorney in Trump Tower on June 9, 2016.

True to form, Trump lashed out at Democratic presidential nominee Hillary Clinton, tweeting: “HillaryClinton can illegally get the questions to the Debate & delete 33,000 emails but my son Don is being scorned by the Fake News Media?”

HillaryClinton can illegally get the questions to the Debate & delete 33,000 emails but my son Don is being scorned by the Fake News Media?

“With all of its phony unnamed sources & highly slanted & even fraudulent reporting, #Fake News is DISTORTING DEMOCRACY in our country!” he tweeted.

As one might expect by now, twitter was swift to respond with several notable tweets weighing in on Trump’s spiteful distractions.

One of our favorites aptly pointed out that Hillary won the popular vote:

Sounds like somebody is feeling inadequate that Hillary Clinton got 3 million more votes and has more of a mandate to run this country! pic.twitter.com/QZCMpv3WWS

“Hillary Clinton did not take aid from a foreign government, you absolute tool,” she aptly pointed out in one tweet.

She also tweeted several memes taking on Trump, such as:

Just getting a little early morning tweeting in before playing golf again this morning?

This one is another favorite:

What's the over/under on whether this is your next defense?#SundayMorning#AMJoy pic.twitter.com/uFRtUMI8xS

All that Hillary email stuff has already been investigated. If it was illegal Republicans would've done something by now. Time to move on pic.twitter.com/9VYvUTuos1

However, in our book, this was the tweet that ran the closest to our thoughts about Trump – not just this morning on Twitter, but as a general rule: