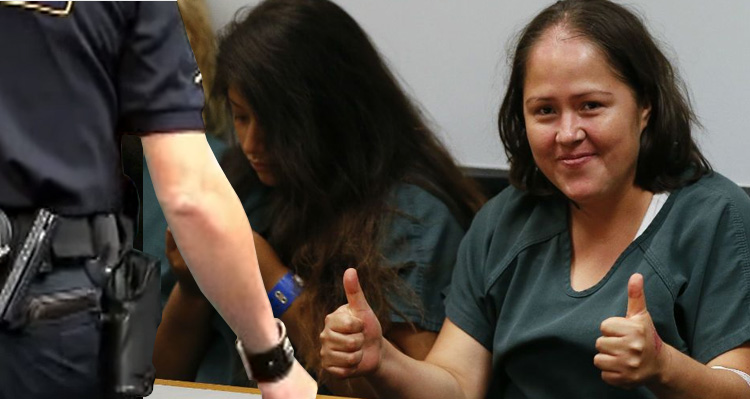 A bizarre court appearance on Friday as a woman accused of killing her four children and their father smiled and gave a thumbs-up in court.

NBC affiliate WCMH-TV reports that “A woman charged with killing four of her young children and their father smiled and flashed a double thumbs up to news cameras during her first court appearance Friday in metro Atlanta before telling a judge she doesn’t want an attorney.”

Isabel Martinez, 33-years-old, appeared before Magistrate Judge Michael Thorpe the day after police said she fatally stabbed her husband Martin Romero and four of her children, ranging in age from 1 to 10 years of age.

CNN reports that police confirmed that “a fifth child also was stabbed but survived. Daughter Diana Romero, who is 9, was in serious but stable condition at a children’s hospital in Atlanta.”

As WCMH reports, “Before the hearing began, Martinez sat with other inmates and struck poses for cameras — smiling, giving the thumbs up, putting her hands in a prayer position and spreading her arms out wide.”

As Judge Thorpe listed the charges against her — five counts of malice murder, five counts of murder and six counts of aggravated assault — Martinez smiled, shook her head “no” and wagged her finger at him. The judge advised her sharply not to perform for the cameras.

Asked about an attorney, Martinez responded through an interpreter that she didn’t want one that her faith and the people would be her lawyer.

“What prompts a person to take the life of such innocent children and her spouse is something we may never understand,” Gwinnett County police said in a statement, adding that: “This is a horrendous crime not only for the victims but for the extended family, neighborhood and community.”