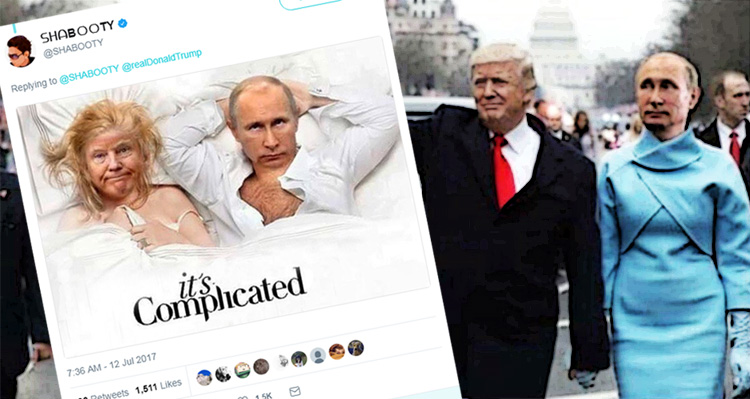 Knee-deep in the biggest scandal so far this year, Trump takes to Twitter to once again make a complete fool of himself.

The Trump administration is reeling in the wake of the stunning Saturday report by the New York Times, revealing that Donald Trump, Jr. met with a Kremlin-connected attorney in Trump Tower on June 9, 2016.

Worse yet, Trump, Jr. effectively took that smoking gun news and turned it on himself, tweeting out a statement and the emails setting up that meeting, removing any doubt that the Trump campaign was interested in colluding with the Russians to influence the presidential campaign.

Trump, Sr. took to Twitter early Wednesday morning to blame “fake news” for his son’s woes – despite the fact that Trump, Jr. incriminated himself  through that tweet, an interview with Fox News host Sean Hannity last night, official statements he made, and statements through his newly hired attorney (one with a long history of representing clients with alleged ties to organized crime, including alleged members of the Bonanno, Gambino, Genovese, and Colombo crime families.)

Referring to Junior’s appearance on Hannity the night before, Trump professed his son’s innocence – once again claiming his administration is being persecuted in a tweet he posted a little past 6 a.m. this morning.

“My son Donald did a good job last night. He was open, transparent and innocent. This is the greatest Witch Hunt in political history. Sad!” he tweeted.

A few minutes later, he returned to an old standard and blamed “Fake Media.”

“Remember, when you hear the words ‘sources say’ from the Fake Media, often times those sources are made up and do not exist.”

Remember, when you hear the words "sources say" from the Fake Media, often times those sources are made up and do not exist.

Social justice and equal rights activist and Huffington Post contributor Luke Waltham took Trump, Sr. to task for attempting to undermine the freedom of the press in a multi-part response:

Comedian & pop culture blogger Shabooty and others, posted a few epic images that we will leave you with. And be sure to let us know your thoughts in the comments below.

They are the best at being awful at collusion.
Hope his kids look as "good" in orange as he does.#WednesdayWisdom pic.twitter.com/6NEiWlwvkS