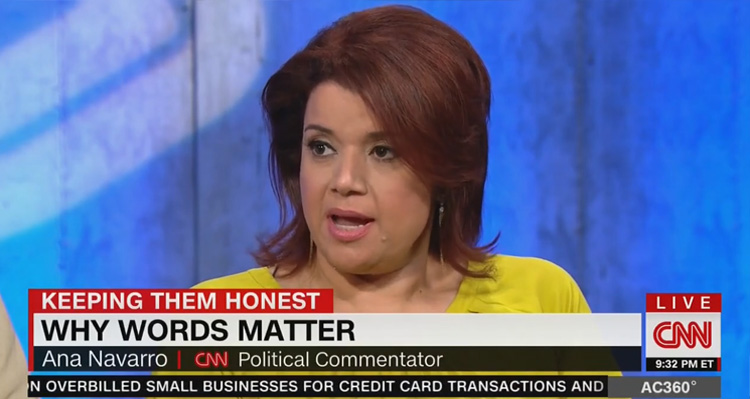 Conservative Ana Navarro is at it again, calling bullsh*t on Trump’s latest nonsense.

CNN commentator Ana Navarro is doesn’t mince words when it comes to her disdain for Trump.

As CNN reports, Trump told reporters on Friday that he would not rule out military intervention in Venezuela. “We have many options for Venezuela. And by the way, I am not going to rule out a military option,” Trump said following a meeting with US Ambassador to the United Nations Nikki Haley and Secretary of State Rex Tillerson.

Navarro took to her Twitter later that day, first remarking on a tweet Trump posted on 31 August 2013 stating: “Be prepared, there is a small chance that our horrendous leadership could unknowingly lead us into World War III.” Navarro responded: “If it wasn’t so serious, it would be funny. There is an old Trump tweet for every occasion.”

She then responded to Trump’s statement about Venezuela with two tweets.

“In case you’ve been away from tv for the last 30 minutes, Trump now has us at brink of war w/North Korea AND Venezuela. Have a nice weekend,” she tweeted, later adding: “Sweet Jesus. Bob Mueller better hurry the hell up before Trump ends up taking military action against at least 1 country in every continent.“

Friday evening, Navarro was “calling bullsh*t,” as Raw Story put it, on Trump’s joke about Russia expelling U.S. diplomats during a panel discussion on CNN.

As the Los Angeles Times reports, “Trump waited a week and a half to comment on Russian President Vladimir Putin’s order to cut the U.S. diplomatic staff in Moscow by hundreds of people,” and “when he did, his response came as a joke.”

“I want to thank him [Putin] because we’re trying to cut down our payroll, and as far as I’m concerned, I’m very thankful that he let go of a large number of people because now we have a smaller payroll,” a grinning Trump told reporters on Thursday.

“There’s no real reason for them to go back,” Trump added, referring to the expelled diplomats. “I greatly appreciate the fact that we’ve been able to cut our payroll of the United States. We’re going to save a lot of money.”

There’s going to come a time in this country where and it’s not “if” but “when,” there’s going to be a natural disaster or a man-made disaster where we are going to need to hear from our president and we need to believe what he is saying.

You can watch Ana Navarro and the other panelists discussing “why words matter” with host Anderson Cooper. Navarro’s remarks about Trump begin at about the 2-minute, 30-second mark.