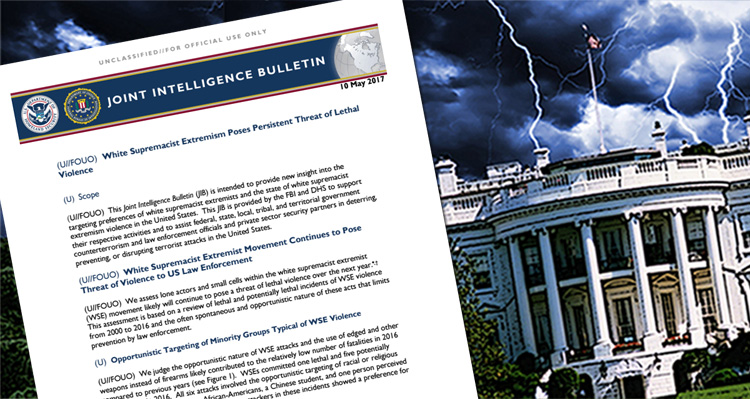 As it turns out, the FBI and Dept. of Homeland Security warned the Trump administration that an incident like Charlottesville was imminent.

Noting that “Trump doesn’t want to call out white supremacists” but “the FBI already did,” Foreign Policy reported on Monday that the FBI and Department of Homeland Security (DHS) “warned” the White House in May “that white supremacist groups had already carried out more attacks than any other domestic extremist group over the past 16 years and were likely to carry out more attacks over the next year, according to an intelligence bulletin obtained by Foreign Policy.”

Foreign Policy adds that: “Even as President Donald Trump continues to resist calling out white supremacists for violence, federal law enforcement has made clear that it sees these types of domestic extremists as a severe threat. The report, dated May 10, says the FBI and DHS believe that members of the white supremacist movement ‘likely will continue to pose a threat of lethal violence over the next year.’”

As Liberals Unite reported on Monday, “After being excoriated in the press and by politicians, and having Ken Frazier, the only black member of the President’s Manufacturing Council resign in protest of his lukewarm response to the horrific events in Charlottesville, Virginia, Donald Trump finally came out against the white supremacist movement today.” But according to many, “it was too little, too late.”

However, as Foreign Policy reports, the FBI and DHS “already concluded that white supremacists, including neo-Nazi supporters and members of the Ku Klux Klan, are in fact responsible for the lion’s share of violent attacks among domestic extremist groups. White supremacists ‘were responsible for 49 homicides in 26 attacks from 2000 to 2016 … more than any other domestic extremist movement,’ reads the joint intelligence bulletin.”

That joint report was titled “White Supremacist Extremism Poses Persistent Threat of Lethal Violence,” and you can view the document and read it by clicking here.