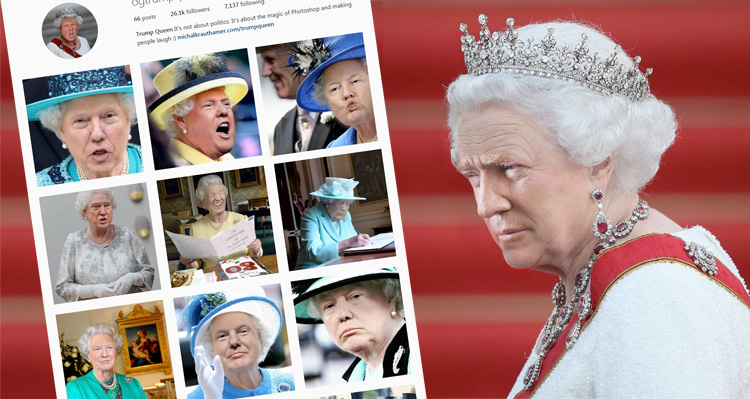 Someone is Photoshopping Trump’s face on Queen Elizabeth’s body and the results are the thing of nightmares – yet they are cracking me up.

You may have been seeing photos of Queen Elizabeth’s body headed with the face of Trump floating around the internet.

These Photoshopped images are the creation of graphic designer Michal Krauthamer, who began the project on March 26, 2016 on her Instagram account “ogtrumpqueen.”

“It’s not about politics,” Krauthamer wrote on the profile, adding: “It’s about the magic of Photoshop and making you laugh.”

Mashable noticed her work, publishing an article about the images titled: “Someone keeps photoshopping Trump’s face on the Queen and it’s terrifying” on December 11, 2016. Huffington Post followed up the next day with their own article, “Someone Keeps Face Swapping Donald Trump With The British Queen,” and Cosmopolitan the following day with: “Donald Trump’s Face on Queen Elizabeth’s Body Is a Thing of Absolute Nightmares.”

Calling Krauthamer’s work “hilarious, bizarre, and sometimes disarming,” LiveForLiveMusic.com reported on December 15, 2016 that the “ogtrumpqueen” Instagram account exploded from “about 50 followers” to “18.5K followers and counting.”

A keyboard player for “up-and-coming jam band PandaJAM,” Krauthamer sat down for an interview with LiveForLiveMusic.com to discuss her music and the “wild rise of #trumpqueen.”

I started working on Trump Queen in March, one day while practicing my Photoshop skills. I’m not sure where the idea came from. But, I did one and it was just too funny, so I decided to make another one. And then another. And then another. Eventually, I had so many that I decided to post them on Facebook and Instagram to share with friends.

Your Instagram account says ““It’s not about politics. It’s about the magic of Photoshop and making you laugh,” but your use of hashtags such as #donaldtrumpisanidiot, #antitrump, and #trumpsucks indicate a fairly political stance. Do you view Trump Queen as being political?

Krauthamer responded that it was still her intention to remain neutral:

I’m terrible at the internet. When I first made the account, I used popular anti-trump hashtags to get a broader reach, but I had no idea what I was doing. Now, people from both sides of the aisle find it hilarious, and I want to keep it that way! I’m happy that Trump Queen is making everyone laugh, because, let’s face it, America has been in need of good laugh for quite some time.

Below are a few of our favorite images, beginning with the first one posted on Instagram on March 26, 2016:

And here’s her latest one, posted on Friday, August 11, 2017 with the following caption: “#TrumpQueen just sharing a special moment with #PrincessPence.”

Be sure to check out the official “ogtrumpqueen” Instagram and Facebook pages to see all her images and to keep up with future posts.