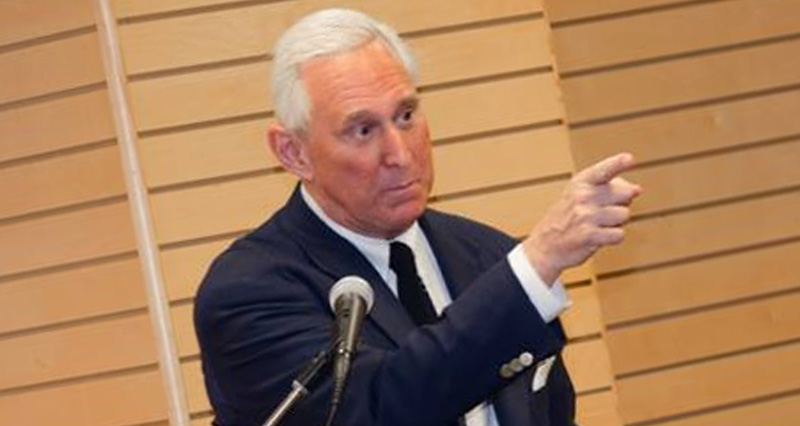 McCain, the 80-year-old Republican Senator for Arizona accused Trump of undermining the “rule of law” in a statement posted to his Twitter account on Friday.

“@POTUS’s pardon of Joe Arpaio, who illegally profiled Latinos, undermines his claim for the respect of rule of law,” McCain wrote.

Stone responded directly to McCain’s tweet the following day, tweeting: “Karma about to get you, @SenJohnMcCain and you will burn in hell for all eternity.”

Karma about to get you, @SenJohnMcCain and you will burn in hell for all eternity https://t.co/C2LcqEFbz9

Last month McCain was diagnosed with primary glioblastoma, a type of brain tumor, after surgery was performed to remove a blood clot at the Mayo Clinic in Phoenix, Arizona. CNN reports that “Glioblastoma is a particularly aggressive tumor that forms in the tissue of the brain and spinal cord, according to the American Brain Tumor Association.”

CNN Chief Medical Correspondent Dr. Sanjay Gupta is quoted by CNN as stating that the surgical procedure McCain underwent is “a significant operation,” adding that average survival for malignant glioblastoma tends to be around 14 months with treatment.

Stone has repeatedly stirred controversy since Trump’s inauguration. The New York Times reported in February that he is under FBI investigation for his alleged contacts with a Russian intelligence agent, and CNN reported in March that he admitted to having direct contact with “Guccifer 2.0”, the online persona who claims responsibility for hacking the Democratic National Committee during the 2016 presidential campaign.

Stone, possibly succumbing to the pressure of that mounting controversy, is known for resorting to Twitter to vent; and as The Washington Post reported in February 2016, Stone was banned from appearing on CNN and MSNBC after posting a series of offensive tweets disparaging women to include: CNN‘s Ana Navarro, investigative journalist Jill Abramson, and U.S. Representative Maxine Waters (D-CA).

In a fit of rage, Stone unleashed a vulgar Twitter tirade against multiple people on Twitter the first week of March of this year – an explosion that included insults, misogynistic slurs, and the stunning admission that he had a “perfectly legal back channel” to Wikileaks founder Julian Assange “who indeed had the goods on #CrookedHillary.”

After having his Twitter account briefly suspended, Stone was at it again, threatening Laura Allison Keiter, the Communications Director at Media Matters for America (MMFA).

Most recently Stone predicted civil war if Trump were to be impeached during an interview with TMZ last week.

“The people who are calling for impeachment didn’t vote for him. They need to get over it. They lost,” he said, adding: “Try to impeach him, just try it. You will have a spasm of violence in this country and insurrection like you’ve never seen.”

The TMZ reporter followed up, asking: “Do you think?”

“No question,” Stone responded. “Both sides are heavily armed, my friend. A politician who votes for impeachment would be endangering their own life.”

“I do,” Stone replied. “That’s what I think will happen.”