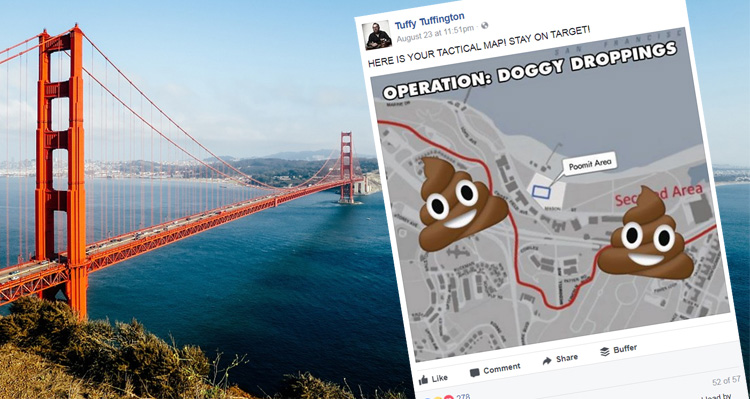 A group of San Francisco dog owners has found a unique way to fight back against right wing extremists.

The Guardian reports that: “When a group of far-right activists come to San Francisco to hold a rally this Saturday, they will be met by peace activists offering them flowers to wear in their hair. Also, dog shit. Lots and lots of dog shit.”

Hundreds of San Franciscans plan to prepare Crissy Field, the picturesque beach in the shadow of the Golden Gate Bridge where rightwing protest group Patriot Prayer will gather, with a generous carpeting of excrement.

Facebook user and proud dog owner Tuffy Tuffington told The Guardian that he came up with the idea while walking his two Patterdale terriers.

“I just had this image of alt-right people stomping around in the poop,” Tuffy Tuffington said of the epiphany he had while walking Bob and Chuck, his two Patterdale terriers, and trying to think of the best way to respond to rightwing extremists in the wake of Charlottesville. “It seemed like a little bit of civil disobedience where we didn’t have to engage with them face to face.”

Tuffington set up a Facebook event page for the event and, as The Guardian reports, “dog owners of San Francisco responded in droves. Many have declared their intention to stockpile their shitpiles for days in advance, then deliver them in bags for the site.”

The Facebook event page, titled “Leave your dog poop on Crissy Field” asks participants to “Leave a gift for our Alt-Right friends. Take your dog to Crissy Field and let them do their business and be sure not to clean it up!”

“Watch out for landmines, friends!” the description continues.

Participants also plan to “get together Sunday and clean up the mess and hug each other!”

Other events and forms of protest are planned as well, according to The Guardian.

Shannon Bolt, a behavior scientist who works at Crissy Field, intends to confront Patriot Prayer in the spirit of the Summer of Love. “As white supremacists and neo-Nazis gather in our midst, we’ll tune into the love frequency again and meet their hatred with flowers for their hair,” she wrote in a Facebook event description.

There will also be contingents of clowns, kayakers, cars, and kids – all hoping to use their particular strengths (humor, seaworthiness, the ability to monopolize parking spaces, and cuteness, respectively) to thumb their noses at hate.

Veteran labor and LGBTQ rights activist Cleve Jones told The Guardian that: “In between you have all sorts of creative and crazy ideas. I kind of like that.”

Jones is working with local drag queen Juanita More to host a rally and march for equality beginning at Harvey Milk Plaza in the city’s Castro district. “There’s this desire to create fear,” he said of media coverage showing torch-wielding racists spewing hateful chants. “With these kinds of creative actions, we dispel fear. We say we’re going to fight you and we’re going to have a ball doing it and we’re going to laugh and love each other.”

Jones is also “raising money for ten local organizations that reflect the diversity of San Francisco, including the Transgender Law Center, Disability Rights and Education Defense Fund, and Muslim Advocates” according to The Guardian.

“When the dust has settled and the smoke has cleared,” Jones said, adding that: “I hope that the appearance of right wing extremists in San Francisco will raise a significant amount of money for the people they seek to harm.”