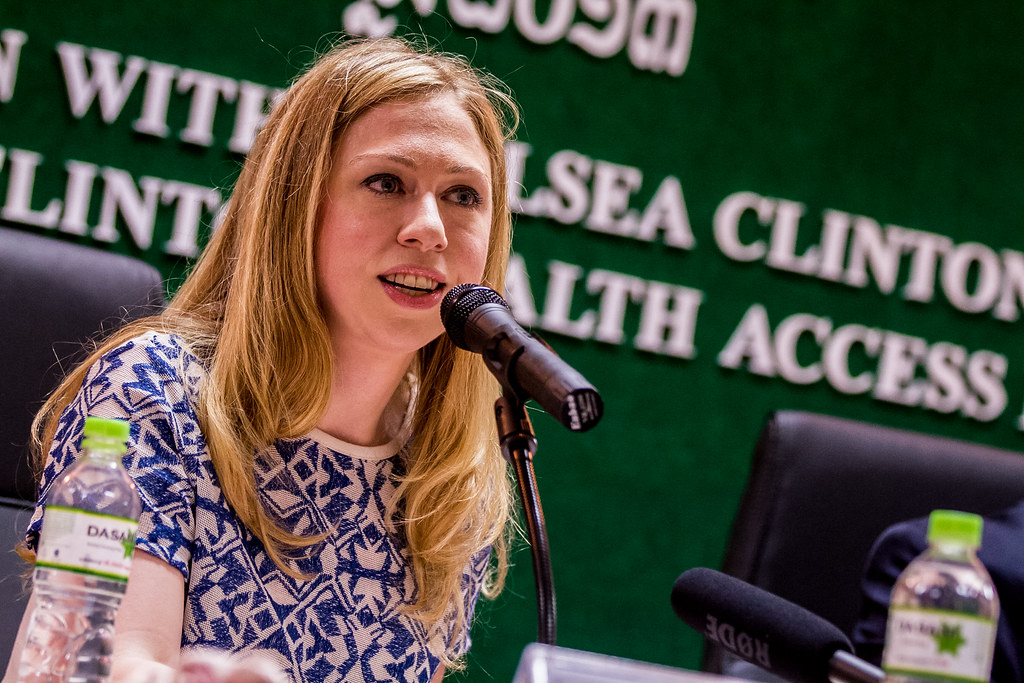 Chelsea Clinton more than holds her own when sparring with Trump.

There have been rumors that Chelsea might be entering the political arena as a candidate for office some time soon, but in the mean time – she has all the right stuff when it comes to taunting the current occupant of the White House.

As The Telegraph recently reported “She is dry” and attacks Trump with a good command of the “facts.” She is a straight shooter; and, unlike Trump, she has learned that the “fewer words the better.” She is “sarcastic” and “keeps up the pressure.”

The Telegraph goes on to list a few of Chelsea’s Trump-bashing tweets. For instance, she came up with this response “when Trump stalled over answering allegations of anti-semitism.”

One would think he would have thought of an answer since yesterday. Here's one: There's no place for any bigotry, ever, in America. https://t.co/XBtcgFnRxd

In May, Chelsea led the criticism as Twitter erupted in outrage over Trump’s suggestion that the Civil War could have been avoided had slave-owner Andrew Jackson been in office at the time. Politico’s chief Washington correspondent, Edward-Isaac Dovere, tweeted “Here’s Trump’s full answer on ‘swashbuckler’ Andrew Jackson and the Civil War: ‘Why could that one not have been worked out?'” And Chelsea offered the following response:

As The Telegraph reported in July, Trump took to Twitter “to defend his daughter Ivanka, following criticism over her taking his seat at the leader’s table during the G20 summit in Hamburg with a couple of tweets.

In his first tweet he described the decision as being standard, adding that Angela M [Merkel], the Chancellor of Germany since 2005, agreed.

“When I left Conference Room for short meetings with Japan and other countries, I asked Ivanka to hold seat. Very standard. Angela M agrees!” he tweeted, following that up with a slam on Democratic rival Hillary Clinton and the media. “If Chelsea Clinton were asked to hold the seat for her mother, as her mother gave our country away, the Fake News would say CHELSEA FOR PRES!” he posted.

If Chelsea Clinton were asked to hold the seat for her mother,as her mother gave our country away, the Fake News would say CHELSEA FOR PRES!

Not one to shy away from a Trump Twitter-tantrum, Chelsea was quick to respond:

Good morning Mr. President. It would never have occurred to my mother or my father to ask me. Were you giving our country away? Hoping not. https://t.co/4ODjWZUp0c

“Thank you to all the White House ushers, butlers, maids, chefs, florists, gardeners, plumbers, engineers & curators for all you do every day” she tweeted in response to a tweet by NBC News correspondent Peter Alexander who tweeted an excerpt from that article with Trump’s quote about the White House being “a real dump” highlighted.

Chelsea has also set her sites on other members of the Trump administration, such as the time she took on former press secretary Sean Spicer in April 2017 after he compared Syrian President Bashar al-Assad to Adolf Hitler, claiming that even someone as “despicable” as the infamous dictator “didn’t even sink to using chemical weapons.”

NBC News aptly reminded Americans at the time that: “Nazis murdered Jews in gas chambers during the Holocaust by the millions with the use of chemical gas agents like Zyklon B,” and Chelsea mocked him, tweeting: “I hope @PressSec takes time to visit @HolocaustMuseum. It’s a few blocks away.”

In the midst of unleashing all this torment on Trump, she even took time out earlier this week to defend Trump’s youngest son – Barron – after entertainment reporter Ford Springer criticized his casual attire in an article published by the Daily Caller.

Rebuking Springer, Chelsea – the daughter of Bill and Hillary – Clinton tweeted: “It’s high time the media & everyone leave Barron Trump alone & let him have the private childhood he deserves,” earning her a thanks from First Lady Melania Trump who tweeted: “Thank you @ChelseaClinton – so important to support all of our children in being themselves! #StopChildhoodBullying.”