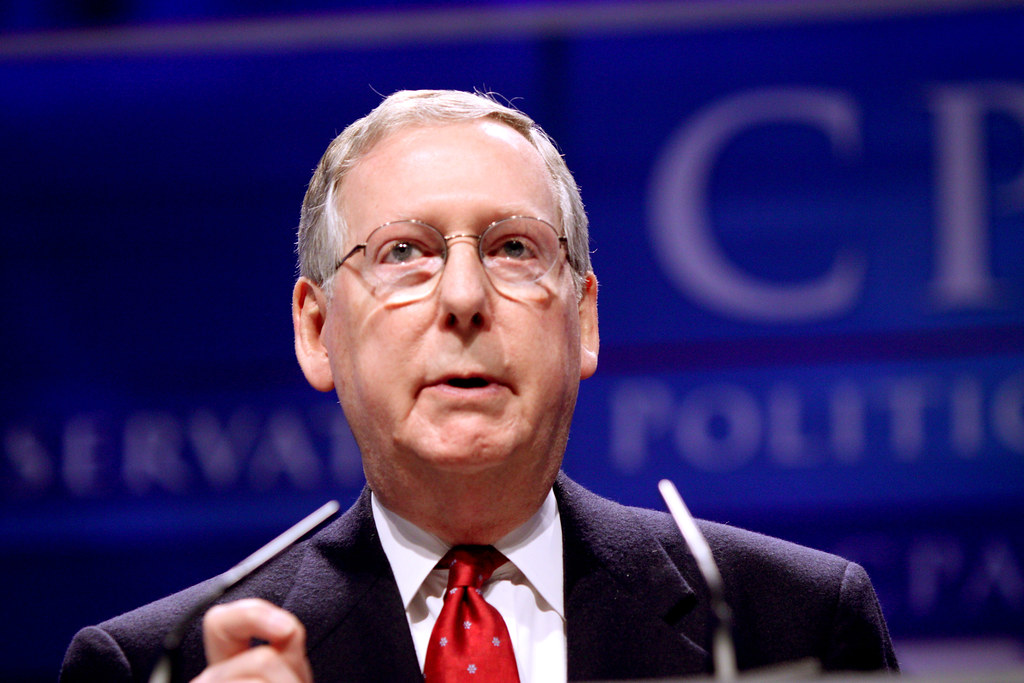 Senate Republicans are outraged by Trump’s strong-arm tactics, particularly in light of his near total lack of comprehension of even the basics about the policy.

The New York Times reported on the growing rift between Senate Republicans and the Trump administration in a blistering article published on Tuesday of this week.

“The fury among Senate Republicans toward Mr. Trump has been building since last month, even before he lashed out at Mr. McConnell,” The New York Times wrote.

Some of them blame the president for not being able to rally the party around any version of legislation to repeal the Affordable Care Act, accusing him of not knowing even the basics about the policy. Senate Republicans also say strong-arm tactics from the White House backfired, making it harder to cobble together votes and have left bad feelings in the caucus.

The New York Times goes on to detail a couple of examples of bullying tactics by the Trump administration:

When Mr. Trump addressed a Boy Scouts jamboree last month in West Virginia, White House aides told Senator Shelley Moore Capito, a Republican from the state whose support was in doubt, that she could only accompany him on Air Force One if she committed to voting for the health care bill. She declined the invitation, noting that she could not commit to voting for a measure she had not seen, according to a Republican briefed on the conversation.

Senator Lisa Murkowski of Alaska told colleagues that when Mr. Trump’s interior secretary threatened to pull back federal funding for her state, she felt boxed in and unable to vote for the health care bill.

In another searing report, NBC News reported on Wednesday that: “Trump’s stepped-up attacks against Senate Republicans are threatening the fall’s busy legislative agenda and any cooperation that remains between them.”

In a raucous speech Tuesday night followed up by Wednesday morning tweets, Trump endorsed a government shutdown, criticized both of the state’s GOP senators, called out Majority Leader Mitch McConnell by name and once again called for drastic changes to the rules governing the upper chamber of Congress.

Continuing, NBC News reports that Trump “called out” Republican Senator Mitch McConnell “by name” during the Tuesday Phoenix rally ” as a way to pressure him into changing Senate rules so that passing legislation would require the support of just 51 senators instead of 60″ in “a move likely to further strain what is supposed to be a partnership with the Senate majority leader,”

Trump followed that up with a Wednesday tweet, reiterating his position:

If Republican Senate doesn't get rid of the Filibuster Rule & go to a simple majority, which the Dems would do, they are just wasting time!

However, as NBC News reported: “McConnell has no plans to change the Senate rules. Even if he wanted to, he would need the support of 50 senators.”

“There’s not a single senator in the majority who thinks we ought to change the legislative filibuster. Not one,” he told reporters in April, a position that hasn’t changed.

And these attacks on McConnell come in the wake of Tuesday’s report by The New York Times that:

The relationship between President Trump and Senator Mitch McConnell, the majority leader, has disintegrated to the point that they have not spoken to each other in weeks, and Mr. McConnell has privately expressed uncertainty that Mr. Trump will be able to salvage his administration after a series of summer crises.

Possibly worse is the revelation by The New York Times that “In a series of tweets this month, Mr. Trump criticized Mr. McConnell publicly, and berated him in a phone call that quickly devolved into a profane shouting match.”

Continuing, The New York Times reports that McConnell has done his share of pushing back – both openly and privately.

McConnell has fumed over Mr. Trump’s regular threats against fellow Republicans and criticism of Senate rules, and questioned Mr. Trump’s understanding of the presidency in a public speech. Mr. McConnell has made sharper comments in private, describing Mr. Trump as entirely unwilling to learn the basics of governing.

In offhand remarks, Mr. McConnell has expressed a sense of bewilderment about where Mr. Trump’s presidency may be headed, and has mused about whether Mr. Trump will be in a position to lead the Republican Party into next year’s elections and beyond, according to people who have spoken to him directly.

Other Republicans are speaking out, such as Michael Steel, a Republican strategist who was an aide to the former House speaker John A. Boehner and to Jeb Bush, a Republican presidential candidate in 2016.

The New York Times quoted him in an August 9th report as saying: “Attacking the Senate majority leader of your own party is utterly incomprehensible and completely wrongheaded. There is no positive result for the president or his agenda in these attacks.”

Senator Bob Corker of Tennessee rebuked Mr. Trump last week for failing to “demonstrate the stability nor some of the competence” required of presidents. On Monday, Senator Susan Collins of Maine said in a television interview that she was uncertain Mr. Trump would be the Republican presidential nominee in 2020.

As The New York Times reported in their article from Tuesday of this week:

Former Senator Judd Gregg of New Hampshire, a Republican who is close to Mr. McConnell, said frustration with Mr. Trump was boiling over in the chamber. Mr. Gregg blamed the president for undermining congressional leaders, and said the House and Senate would have to govern on their own if Mr. Trump “can’t participate constructively.”

“Failure to do things like keeping the government open and passing a tax bill is the functional equivalent of playing Russian roulette with all the chambers loaded,” Mr. Gregg said.

Senate Republicans have been expressing their own frustration more openly in recent weeks. After Trump’s defense of some of the white nationalist protesters in Charlottesville, some members of the party stepped up their criticism. Sen. Bob Corker, R-Tenn., said that Trump doesn’t have the “stability nor some of the competence” necessary for the job.

In public, Republican leaders have tried to downplay any challenges with Trump.“The President and I, and our teams, have been and continue to be in regular contact about our shared goals,” McConnell said in a statement Wednesday afternoon. “We have a lot of work ahead of us, and we are committed to advancing our shared agenda together and anyone who suggests otherwise is clearly not part of the conversation.”

Such rifts, while not unprecedented, are rare. As The New York Times reported:

There are few recent precedents for the rift. The last time a president turned on a legislative leader of his own party was in 2002, when allies of George W. Bush helped force Trent Lott to step down as Senate minority leader after racially charged remarks at a birthday party for Senator Strom Thurmond, Republican of South Carolina.

For the moment, Mr. McConnell appears to be far more secure in his position, and perhaps immune to coercion from the White House.

“The president should start bumping off incumbent Republican members of Congress in primaries,” Stone is quoted by The New York Times as saying. “If he did that, Mitch McConnell and Paul Ryan would wet their pants and the rest of the Republicans would get in line.”

However, as The New York Times concluded in their report:

McConnell’s allies warn that the president should be wary of doing anything that could jeopardize the Senate Republican majority.

“The quickest way for him to get impeached is for Trump to knock off Jeff Flake and Dean Heller and be faced with a Democrat-led Senate,” said Billy Piper, a lobbyist and former McConnell chief of staff.

Steven Law, a former chief of staff to McConnell and current CEO of the Senate Leadership Fund, a super PAC endorsed by McConnell to elect Senate Republicans, said that Republicans will be hyper-focused not on Trump but on tax reform in the fall.

“The president needs to make up his own mind on how to invest his political capital,” Law said.