Trump Gets Hammered For His Abominable Response To Hurricane Harvey 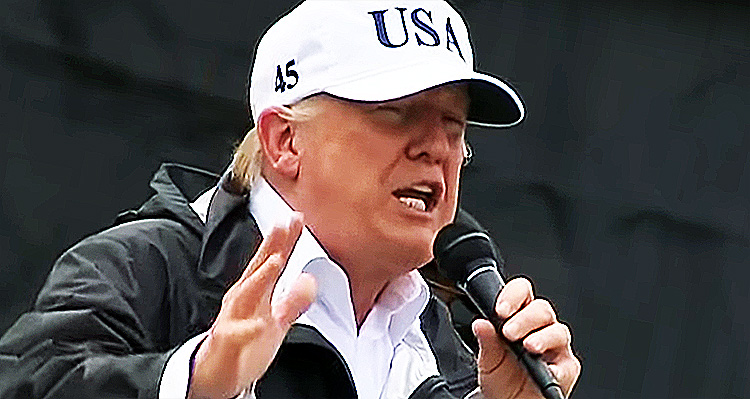 Trump under fire for treating hurricane relief efforts like another one of his campaign rallies as well as a fundraiser for his re-election campaign.

NBC News reports that Hurricane Harvey “became historic Tuesday when the record for rainfall from a tropical cyclone in the continental United States was smashed at 51.88 inches in both Mont Belvieu, 35 miles east of Houston, and Cedar Bayou, east of Highlands.” The “confirmed death toll stands at nine, with many missing feared dead,” and “at least 18,600 people rescued from water across southeast Texas and at least 286,500 customers remain without power.”

Worse yet, NBC News confirms that “Harvey made landfall again early Wednesday, roaring ashore in western Louisiana near the border with Texas as residents in the region brace for as much as 6 to 10 inches of additional rain.” The National Hurricane Center is warning that: “Ongoing catastrophic and life-threatening flooding will continue in southeastern Texas,” and Harvey and “tornadoes are possible through the day across parts of Louisiana, Mississippi, southern Alabama, and southeast Arkansas.”

Trump had an opportunity on Tuesday to unify the country with his visit to the area, but instead his visit is being described as being divisive. Huffington Post reports that Trump’s response to Hurricane Harvey was “abominable,” that “Any media narrative that he could now ‘unify’ the country in the aftermath must be challenged.”

Hurricane Harvey was the rarest of disasters to strike during the Trump presidency — a maelstrom not of Mr. Trump’s making, and one that offers him an opportunity to recapture some of the unifying power of his office he has squandered in recent weeks…. Trump is behaving like a man whose future depends on getting this right.

In a subsequent article published after his visit, The New York Times reported that while “for the most part, Mr. Trump kept to the script. But there were a few jarring, quintessentially Trumpian moments.”

At Joint Base Andrews, his wife, Melania, who accompanied him, boarded Air Force One, bound for the disaster zone, in six-inch stiletto heels that became the subject of wide comment on social media. Instead of touring shelters or visiting local residents in their homes and businesses, Mr. Trump stuck close to emergency management officials — men in uniforms — and seemed most animated when he basked in the applause of an impromptu rally outside the Corpus Christi firehouse.

A crowd of about 1,000 people, some of them cheering, greeted Mr. Trump as he left the firehouse. He grabbed a Texas flag and shouted back to the crowd, seeming to forget, for the moment, that he was at the scene of a disaster and not one of his rallies. “What a crowd!” he said. “What a turnout!”

As Raw Story reports, “Trump, who is notoriously obsessed about drawing large crowds, was quickly hammered on the internet for treating a hurricane relief effort like yet another one of his campaign rallies.”

Trump arrived in Corpus Christi wearing the white “45/USA” hat that’s available for $40 on his own website, shop.donaldjtrump.com. This marks the third time in four days that the president has worn on-sale campaign merchandise during events related to Harvey, including two previous meetings for which the White House released photographs.

Trump has used his Harvey meetings as product placement for hats he sells for $40 two days in a row now… pic.twitter.com/EQcPkS8Yit

There is also Trump’s earlier responses to Harvey. As Huffington Post reports: “Trump used the early hours of the hurricane, and the media coverage around it, to rampage on democracy and further divide rather than unite a nation.”

He pardoned the racist former Sherif[f] Arpaio, causing enormous backlash even among some Republicans and conservative pundits for this blatant contempt for the rule of law, and even later bragged that he did it at this time for “ratings.”

He signed the order to ban any transgender people from entering the military, again something many Republicans opposed, putting fear into the hearts of so many people serving and defending this country honorably.

Huffington continued, turning attention to the Camp David meetings and other affairs from the early hours of Hurricane Harvey:

Trump went to Camp David on Friday as the category 4 hurricane made landfall, leaving Mike Pence and others in the Situation Room at the White House to deal with the storm, while he sat alone at his desk and fumbled around on Twitter. He sent out tweets as if he was watching a great show about the “HISTORIC” storm, and seeming to thank the people of Houston for it ― while thousands were stranded and needing help.

He even thanked the people of Texas in one inexplicable Sunday tweet:

HISTORIC rainfall in Houston, and all over Texas. Floods are unprecedented, and more rain coming. Spirit of the people is incredible.Thanks!

Trump also tweeted on Sunday that he would be visiting Texas and Missouri, taking time to boast of his election victory in the state:

I will be going to Texas as soon as that trip can be made without causing disruption. The focus must be life and safety.

I will also be going to a wonderful state, Missouri, that I won by a lot in '16. Dem C.M. is opposed to big tax cuts. Republican will win S!

He even took time out to plug some merchandise for a long-time ally, Sherif[f] David Clarke, who Huffington Post aptly describes as the “Milwaukee lawman who, like Arpaio, has a long history of allegations of abuse.”

A great book by a great guy, highly recommended! https://t.co/3jbDDN8YmJ

While the government itself responds with help, Trump himself responded without providing leadership or attempting to unify Americans. He only showed callous disregard, instilled fear and further divided this country as millions faced the wrath of a deadly storm.