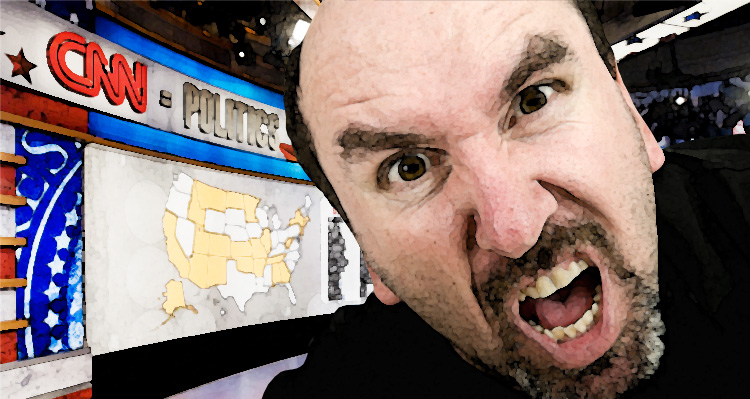 CNN is not holding back when it comes to their disdain for Trump’s long-standing racist remarks and tweets.

While his article, titled “The dark racial sentiment in Trump’s NBA and NFL criticism” was a direct response to Trump’s weekend tirade – it also addressed the greater issue of his long-standing history of racist remarks and tweets.

The article begins by recounting Trump’s Friday night rally where he lashed out at NFL players for sitting down or otherwise protesting during the playing of the national anthem.

Trump followed that up with a series of tweets Saturday morning, first lashing out at “NBA superstar Steph Curry for expressing ambivalence about whether or not to attend the traditional White House celebration for champions in professional sports.”

“Going to the White House is considered a great honor for a championship team. Stephen Curry is hesitating, therefore invitation is withdrawn!” he tweeted.

Going to the White House is considered a great honor for a championship team.Stephen Curry is hesitating,therefore invitation is withdrawn!

He followed that up a few hours later with a two-part tweet aimed at NFL players.

“If a player wants the privilege of making millions of dollars in the NFL, or other leagues, he or she should not be allowed to disrespect our Great American Flag (or Country) and should stand for the National Anthem. If not, YOU’RE FIRED. Find something else to do!”

If a player wants the privilege of making millions of dollars in the NFL,or other leagues, he or she should not be allowed to disrespect….

…our Great American Flag (or Country) and should stand for the National Anthem. If not, YOU'RE FIRED. Find something else to do!

Moving into his analysis, Cillizza writes that although “this is classic Trump,” one must consider Trump’s remarks in the context of the racial makeup of the NFL and NBA.

On one level, this is classic Trump. He feels as though he is being disrespected — whether by NFL players not standing for the national anthem or by Curry saying if it was up to him, the Golden State Warriors would not visit the White House…But, there’s something far more pernicious here. Both the NFL and the NBA are sports in which the vast majority of the players are black and the vast majority of owners are white. In the NFL, there are 0 black owners of the 32 teams. In the NBA, Michael Jordan is the lone black owner of a team.

Continuing, Cillizza points out that “In both his Curry tweet and his two NFL tweets, Trump expressed frustration that these lucky athletes felt the need to be ungrateful.”

Trump noted the “great honor” of going to the White House and the “privilege of making millions of dollars in the NFL.” You should just be thankful for what you have and not be making any trouble, Trump is telling these players.

Here’s the thing: Even if we lived in a color-blind society, that would be a dangerous sentiment. After all, freedom of expression is right there in the First Amendment. And our brave soldiers didn’t fight and die so that everyone stood during the national anthem. They fought so people could have the right to make a choice about whether or not they wanted to stand. That’s the whole damn point of the First Amendment.

The thing is: We don’t live in a color-blind society. Slavery sits at the founding roots of America. The goal of racial equality remains a goal, not an achievement. To pretend otherwise is to willfully blind yourself to hundreds years of history.

Cillizza goes on to write that the context of Trump’s remarks darken in light of the “racially coded language” he used throughout his presidential campaign.

“You’re living in poverty, your schools are no good, you have no jobs, 58% of your youth is unemployed — what the hell do you have to lose?” Trump said of African-Americans in a speech to a largely white audience in Michigan during the campaign. When NBA star Dwyane Wade’s cousin was shot in Chicago, Trump tweeted: “Dwayne Wade’s cousin was just shot and killed walking her baby in Chicago. Just what I have been saying. African-Americans will VOTE TRUMP!”” He took an inordinate amount of time to condemn former Ku Klux Klan leader David Duke. And so on.

As President, Trump has done little to ease concerns about his racial views — and, in fact, has heightened them. His handling of the Charlottesville, Virginia, protests — in which white supremacists and neo-Nazis marched in protest of the removal of a statue of Robert E. Lee — was particularly alarming.

Trump defenders will note that Trump didn’t name names — other than Curry — when he blasted professional athletes. That “we” are adding color to it, not him.

But that doesn’t fly. As I noted above, both the NFL and NBA are majority black. And those refusing to stand during the national anthem are, with one exception, also all black.

Trump knows this. He is an avid consumer of TV and culture. Which means that he is purposely playing at and with racial animus here. That is a dark thing to do as the leader of the United States. And something he deserves to be condemned for.

An all-too-typical footnote to Cillizza’s article is the fact that Trump continued his attack on the NFL Sunday morning with another two-part tweet.

“If NFL fans refuse to go to games until players stop disrespecting our Flag & Country, you will see change take place fast. Fire or suspend! NFL attendance and ratings are WAY DOWN. Boring games yes, but many stay away because they love our country. League should back U.S.”

If NFL fans refuse to go to games until players stop disrespecting our Flag & Country, you will see change take place fast. Fire or suspend!

…NFL attendance and ratings are WAY DOWN. Boring games yes, but many stay away because they love our country. League should back U.S.