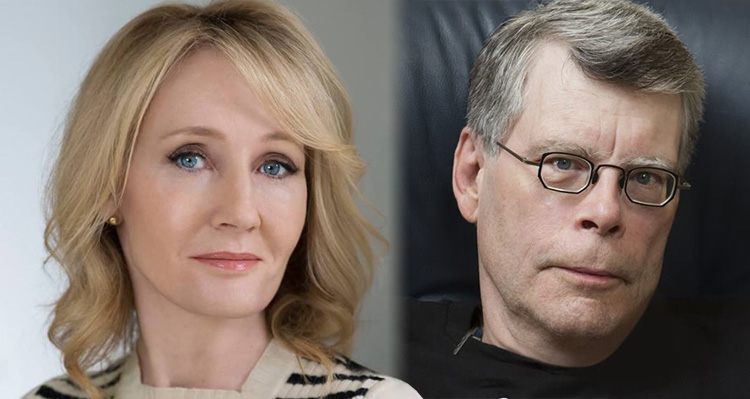 Never ones to shy away from mocking Trump – Stephen King and J.K. Rowling form an occasional Twitter alliance as each of them continue their long-standing individual battles against him.

As Richard Zombeck reported last year, “Writers are the last people you want as an enemy. As Mark Twain was famous for saying, ‘Never pick a fight with people who buy ink by the barrel and paper by the ton.’ In fact, as obvious as it may seem, writers have a way of getting you right where it hurts. They are frustrated, snarky, and incredibly descriptive.”

British novelist, screenwriter, and film producer J.K. Rowling and horror writer Stephen King have taken to teaming up on Twitter to voice their opposition to his  regime.

Most recently, King retweeted one of Rowling’s tweets responding to part one of a two part tweet by Trump about the NFL.

King followed up yesterday with a tweet of his own: “According to the NY Times, N. Korea asks Repubs for help figuring out Doanld [sp?] Trump. Repubs respond, ‘We were going to ask you.'”

The two of them also teamed up in May 2017 when Trump blocked King from interacting with his Twitter account.

King announced the news on his own account, tweeting: “Trump has blocked me from reading his tweets. I may have to kill myself.”

Trump has blocked me from reading his tweets. I may have to kill myself.

The National Post speculated at the time as to the reasoning behind Trump’s block:

In the past, the writer has referred to the president as “Trumpty-Dumpty,” a “bad-tempered asshole” and a “rabid coyote with bad hair,” and compared him to Cthulhu. But we can surmise that Trump’s tipping point finally came when King last tweeted, “If Ivanka Trump had grown up in farm country, like some of us, she’d know her father is reaping exactly what he sowed.” And then this follow-up: “Trump’s cabinet offers a postgraduate-level course in ass-kissing.”

Rowling responded to King a couple of minutes later, promising to “direct message” him Trump’s tweets.

I still have access. I'll DM them to you. https://t.co/MhibEYDBTg

King followed that up a couple of hours later, speculating that it might have been a hoax:

Thanks. Maybe it's a hoax. I'm good either way. I'll always have Pence, hahahaha.

But alas, it wasn’t:

Blocked! Condemned to an existential wasteland of Trumplessness!

While the two of them have been actively voicing their opinion about Trump for a long time, they have not always taken the same path in doing so.

For example, in May 2016, King joined hundreds of other writers to pen “An open letter to the American people,” ripping Donald Trump to shreds. Other signatories to the letter included names such as Junot Diaz, Cheryl Strayed, and Dave Eggers.

The letter warned that Trump “deliberately appeals to the basest and most violent elements in society” and “denigrates women and minorities.” The letter went on to explain that their opposition to Trump was based on “the history of dictatorship is the history of manipulation and division, demagoguery and lies” and “because neither wealth nor celebrity qualifies anyone to speak for the United States, to lead its military, to maintain its alliances, or to represent its people.”

The letter ended by stating that: “for all these reasons, we, the undersigned, as a matter of conscience, oppose, unequivocally, the candidacy of Donald J. Trump for the presidency of the United States.”

Rowling took a different approach that same month when she defended Trump’s right to come to the UK and “be offensive and bigoted there” – despite the fact that she found almost everything he says to be “objectionable.”

As The Guardian reported at the time, “Rowling [was] speaking at Pen America’s annual literary gala in New York, [and] was referring to the petition launched last year calling for Trump to be barred from visiting the UK, which garnered hundreds of thousands of signatures.”

While she personally finds Trump “offensive and bigoted”, Rowling said that his freedom to speak “protects my freedom to call him a bigot”, … and she is “free to explain that I’m exploring human nature and morality, or to say ‘you’re an idiot’, depending on which side of the bed I got out of that day.”

“If you seek the removal of freedoms from an opponent simply on the grounds that they have offended you, you have crossed a line to stand alongside tyrants who imprison, torture and kill on exactly the same justifications,” she added.

Continuing, The Guardian reported that Rowling was clear that the US presidential hopeful’s “freedom guarantees mine.”

“Unless we take that absolute position without caveats or apologies we have set foot upon a road with only one destination,” she told the audience, adding: “If my offended feelings can justify a travel ban on Donald Trump, I have no moral grounds on which to argue that those offended by feminism, or the fight for transgender rights, or universal suffrage, should not oppress campaigners for those causes.”