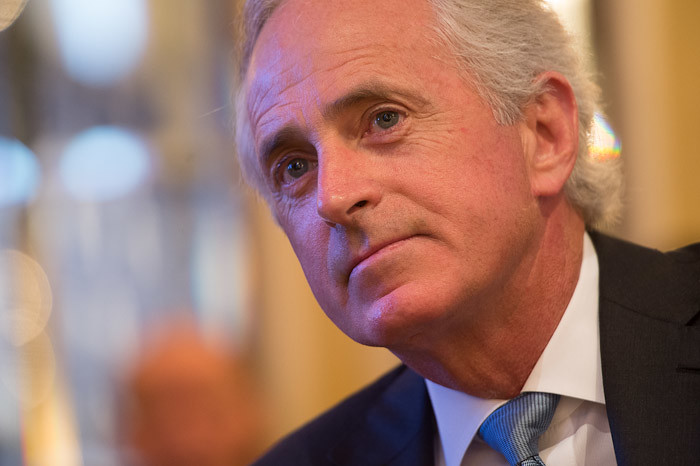 Sen. Bob Corker (R-TN), chairman of the influential Foreign Relations Committee, announced in September that he would not seek re-election in 2018; and, as NPR reported at the time – he hinted that he might “speak out more in areas where he may disagree with President Trump.”

“I also believe the most important public service I have to offer our country could well occur over the next 15 months,” Corker said in a statement, adding: “I want to be able to do that as thoughtfully and independently as I did the first 10 years and nine months of my Senate career.”

Last week, those words rang true as Corker offered what The Washington Post called an “extraordinarily dim assessment of the Trump administration” while commenting on an NBC News report that Secretary of State Rex Tillerson had to be talked out of resigning after disagreements with Trump.

Trump began by tweeting that Corker “begged” for his endorsement and then “dropped out of the race” when he said “no thanks.”

Senator Bob Corker “begged” me to endorse him for re-election in Tennessee. I said “NO” and he dropped out (said he could not win without my endorsement). He also wanted to be Secretary of State, I said “NO THANKS.” He is also largely responsible for the horrendous Iran Deal!

Senator Bob Corker "begged" me to endorse him for re-election in Tennessee. I said "NO" and he dropped out (said he could not win without…

..my endorsement). He also wanted to be Secretary of State, I said "NO THANKS." He is also largely responsible for the horrendous Iran Deal!

In his third, and final tweet in the series, Trump accused Corker of working against his agenda and of not having “the guts to run!”

…Hence, I would fully expect Corker to be a negative voice and stand in the way of our great agenda. Didn't have the guts to run!

Corker pushed back with a tweet of his own, posting:

It’s a shame the White House has become an adult day care center. Someone obviously missed their shift this morning.

It's a shame the White House has become an adult day care center. Someone obviously missed their shift this morning.

Reporting on the online clash between Corker and Trump, The Atlantic reports that:

The New York Times reports that Corker escalated the war of words later on Sunday, reporting that:

[Corker] charged in an interview on Sunday that President Trump was treating his office like “a reality show,” with reckless threats toward other countries that could set the nation “on the path to World War III.”

In an extraordinary rebuke of a president of his own party, Mr. Corker said he was alarmed about a president who acts “like he’s doing ‘The Apprentice’ or something.”

“He concerns me,” Mr. Corker added. “He would have to concern anyone who cares about our nation.”

The [Twitter] exchange laid bare a deeper rift: [Corker] views Mr. Trump as given to irresponsible outbursts — a political novice who has failed to make the transition from show business.

Mr. Trump poses such an acute risk, the senator said, that a coterie of senior administration officials must protect him from his own instincts. “I know for a fact that every single day at the White House, it’s a situation of trying to contain him,” Mr. Corker said in a telephone interview.

The New York Times concluded their report, stating that: “Mr. Corker would not directly answer when asked whether he thought Mr. Trump was fit for the presidency. But he did say that the commander in chief was not fully aware of the power of his office.”

“I don’t think he appreciates that when the president of the United States speaks and says the things that he does, the impact that it has around the world, especially in the region that he’s addressing,” he said, adding “so, yeah, it’s concerning to me.”