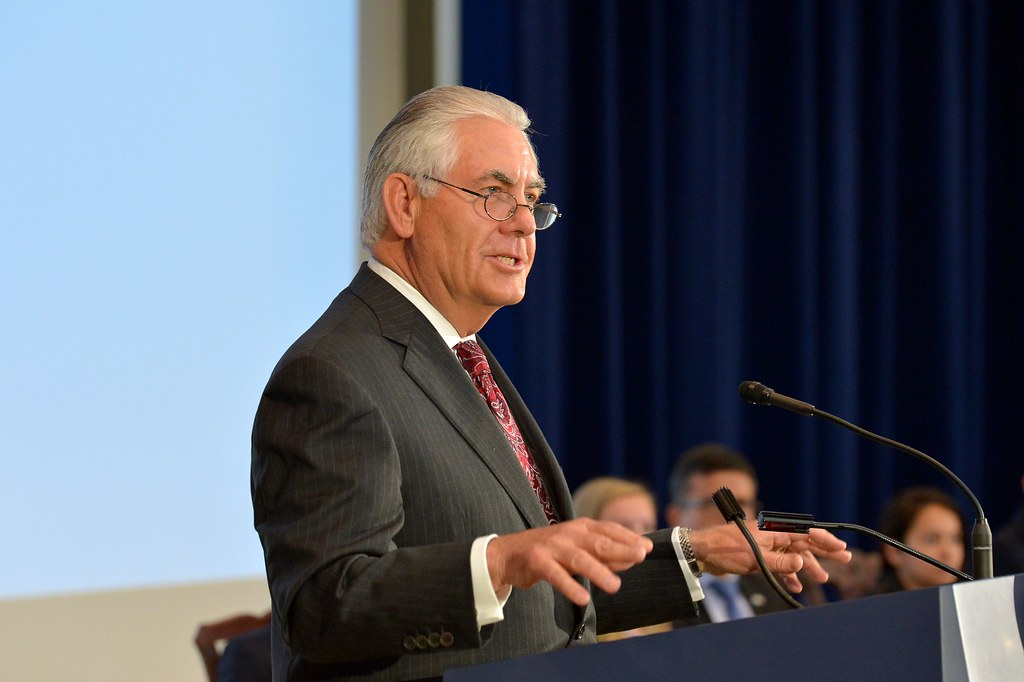 Robert Reich posts open letter to Sec. of State Rex Tillerson to get together with other Cabinet officials and remove Trump from office.

Bill Clinton’s Labor Secretary, Robert Reich, posted an open letter to embattled Sec. of State Rex Tillerson, urging him not to quit but to get together with other administration officials and oust Trump from office pursuant the 25th Amendment.

“I can understand why you feel Washington is a place of ‘petty nonsense,'” Reich began, adding that he was “reasonably sure you called [Trump] a moron, which doesn’t make Washington any less petty. You probably called him a moron because almost all of us out here in the rest of America routinely call him that.”

Continuing, Reich pointed out that interest in Tillerson’s remarks was indicative of the current concerns regarding Trump’s mental health.

“There are far more important issues than the epithet you likely used to describe your boss,” Reich wrote, adding, “On the other hand, your calling him a moron wouldn’t itself have mushroomed into a headline issue — even in petty Washington — if there weren’t deep concerns about the President’s state of mind to begin with.”

“The reason your moronic comment about Trump made the headlines is that Trump really is a moron, in the sense you probably meant it: He’s impulsive, mercurial, often cruel, and pathologically narcissistic,” Reich added. “Some psychologists who have studied his behavior have concluded he’s a sociopath.”

*** See: What Exactly Is Wrong With Donald Trump? Leading Psychologists May Have An Answer ***

Continuing, Reich writes that Tillerson is serving as Sec. of State “under a president who’s dangerously nuts,” providing several examples:

Given all this, I’m not surprised to hear that you’ve talked about resigning, but that Mattis and John Kelly, the White House chief of staff, have talked you out of it.

I urge you not to resign. America and the world need sane voices speaking into the ear of our Narcissist-in-Chief. As Senator Bob Corker, Republican of Tennessee and chairman of the Foreign Relations Committee said recently, it’s you, Mattis, and Kelly who “help separate our country from chaos.” I don’t think Corker was referring to chaos abroad.

Let Trump fire you if he wants to. That would further reveal what a moron he is.

But if you really did want to serve the best interests of this nation, there’s another option you might want to consider.

Quietly meet with Mattis, Kelly, and Vice President Pence. Come up with a plan for getting most of the cabinet to join in a letter to Congress saying Trump is unable to discharge the duties of his office.

Under the 25th Amendment, that would mean Trump is fired.

In a subsequent post, Reich wrote that his “mind keeps going back to the 25th Amendment, which contemplates precisely what we have today – a president who is mentally unfit to hold the office, and therefore poses a danger to the nation.”

I remember being struck many months ago when Republican Senator Bob Corker, chairman of the Senate Foreign Relations Committee, said Trump “has not demonstrated he understands the character of this nation” and “has not yet been able to demonstrate the stability, nor some of the competence that he needs to demonstrate in order to be successful.” And then when former director of national intelligence James R. Clapper Jr. said: “I really question his ability to — his fitness to — be in this office, and I also am beginning to wonder about his motivation for it.”

I’ve also been reading whatever I can by specialists who study personality disorders. For example, Robert Jay Lifton, a psychiatrist and a psychoanalyst, and Judith L. Herman, a professor at Harvard Medical School who has done pioneering research on trauma, have written that Trump’s “repeated failure to distinguish between reality and fantasy, and his outbursts of rage when his fantasies are contradicted” suggest that when faced with crisis he “will lack the judgment to respond rationally.”

Reich concluded that post, returning his attention to the 25th Amendment:

All this leads me back to the 25th amendment. It has never been employed, but this seems to be the condition for it. And yet, as long as Republican control Congress, I wonder if it’s relevant. Could there be a tipping point? I ask myself what behavior on the part of Trump might cause congressional Republicans to look to the 25th Amendment? What do you think?