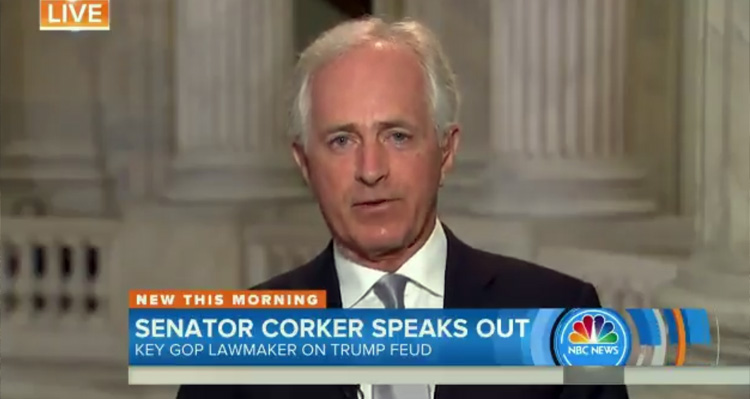 Republican Chairman of the Senate Foreign Relations Committee warns that Trump could be moving the USA toward a choice that could lead to world war.

Tennessee Sen. Bob Corker has been one of Trump’s most outspoken Republican critics, and Tuesday was no exception, when he told NBC’s “Today Show” hosts that Trump’s aggressive comments about North Korea are creating a situation that could lead to “world war.”

Asked by co-host Natalie Morales: “Left to his own devices, do you think the president is a threat to national security?” Corker warned that Trump’s aggression directed toward North Korea serves to “kneecap” Rex Tillerson, his Secretary of State, and his efforts with Pyongyang, moving the world closer to “world war.”

“When you send out tweets into the region to raise tensions, when you kneecap, which is what he’s done publicly, when you kneecap your secretary of state, whose diplomacy you have to depend upon to really bring China to the table to do the things that need to be done, back-channeling in some cases to North Korea, when you kneecap that effort you really move our country into a binary choice which could lead to a world war,” Corker stated.

Continuing, he added: “So, yes, I want him to support diplomatic efforts, not embarrass and really malign efforts that are underway to try to get some kind of a diplomatic solution here and I think most people would agree on that.”

WATCH: "Left to his own devices, do you think the president is a threat to national security?" @savannahguthrie asks @SenBobCorker pic.twitter.com/GxFFZvUTeU

Corker has been particularly outspoken since making his September 2017 announcement that he would not seek re-election in the 2018 elections, prompting Trump to strike back on Twitter like he did this morning, tweeting that: “Bob Corker, who helped President O give us the bad Iran Deal & couldn’t get elected dog catcher in Tennessee, is now fighting Tax Cuts. Corker dropped out of the race in Tennesse [sic] when I refused to endorse him, and now is only negative on anything Trump. Look at his record!”

Isn’t it sad that lightweight Senator Bob Corker, who couldn’t get re-elected in the Great State of Tennessee, will now fight Tax Cuts plus! Sen. Corker is the incompetent head of the Foreign Relations Committee, & look how poorly the U.S. has done. He doesn’t have a clue as the entire World WAS laughing and taking advantage of us. People like liddle’ Bob Corker have set the U.S. way back. Now we move forward!

Earlier in October, Trump similarly lashed out after Corker offered what The Washington Post called an “extraordinarily dim assessment of the Trump administration” while commenting on an NBC News report that Tillerson had to be talked out of resigning after disagreements with Trump.

Trump struck back with a three-part tweet, prompting Corker to tweet: “It’s a shame the White House has become an adult day care center. Someone obviously missed their shift this morning.”

Reporting at the time on the online clash, The Atlantic reported that: