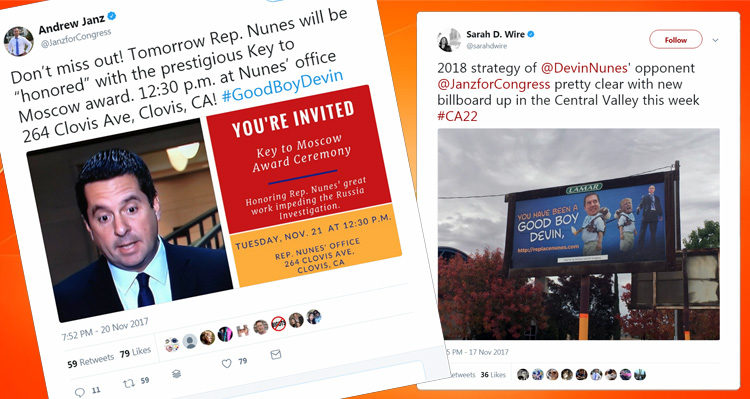 Trump lackey Devin Nunes set to be honored Tuesday evening for his great work and achievements on behalf of Russia.

Rep. Devin Nunes (R-CA), who served on the Trump transition team, has been running interference for Trump spanning at least as far back as February of 2017 when he became the first leading Republican to deny that the intelligence community had evidence of contact between the Trump campaign and Russian operatives.

On April 6, 2017 Nunes, who serves as the Chairman of the House Intelligence Committee, temporarily stepped down from leading the Russia investigation while the Office of Congressional Ethics investigates whether he “made unauthorized disclosures of classified information, in violation of House Rules, law, regulations, or other standards of conduct”  during a press conference in early March.

In a June 2017 article, Mother Jones listed Nunes as a “key player in the Trump-Russia scandal. Listed as one of the “Lapdogs,” Mother Jones reported:

The House Intelligence Committee chairman’s brazen attempt to provide cover for Trump’s wiretapping allegations backfired in epic fashion. After Nunes’ White House-aided effort was unmasked, he was forced to recuse himself from the Intelligence Committee’s probe of Russian election meddling. Now the California congressman, who served on Trump’s transition team, is himself under investigation by the House Ethics Committee for possibly disclosing classified information. At a private GOP fundraiser in April, Nunes echoed Trump’s ongoing claim that the purpose of the congressional investigations into Russian election interference was to justify Hillary Clinton’s loss.

One of Nunes’ Democratic opponents, Fresno County Deputy District Attorney. Andrew Janz, 33, has come up with the perfect way to troll Nunes – a special award ceremony to honor Nunes for his work on behalf of Vladimir Putin.

Janz announced the event on the Daily Kos over the weekend, writing under the pen name JanzForCongress:

Every Tuesday, local constituents of Devin Nunes gather outside his Clovis office in protest to his votes on healthcare and taxes, his allegiance to Trump and Russia, and his lack of respect for constituents (won’t meet with locals and hasn’t held a town hall in years). They call this weekly protest, The Every Tuesday Vigil.

This Tuesday Vigil will be a special welcome home to Rep. Nunes as he returns to the district for Thanksgiving break. We will be “honoring” him for his work on behalf of Russia with a special presentation ceremony where he will receive the “Key to Moscow”.

He also posted reminders of the event on his Facebook and Twitter pages this Monday, and there is an event page on Facebook with additional information and updates as well.

The Los Angeles Times also reported that Janz has placed a new billboard in Clovis, California, across the street from a local bar.

[The Billboard] depicts Russian President Vladimir Putin holding leashes attached to children’s bodies with the faces of local GOP Rep. Devin Nunes and  Trump. The Nunes child is holding an ice cream cone. “You have been a good boy Devin,” the billboard says…. Janz, paid for the billboard, and it directs passersby to Janz’s campaign website.

2018 strategy of @DevinNunes' opponent @JanzforCongress pretty clear with new billboard up in the Central Valley this week #CA22 pic.twitter.com/ZeDWfenmfL