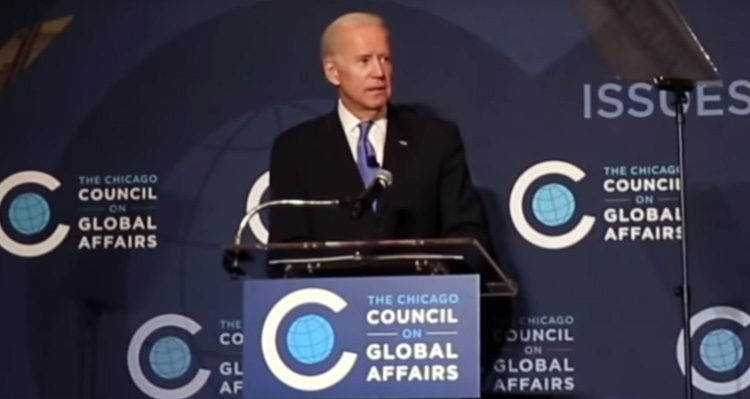 Joe Biden tore into Trump Wednesday night, calling him a charlatan – adding that it’s time for him to “grow up and act like a real leader.”

Former Vice President Joe Biden slammed Trump during a Wednesday speech at the Chicago Council on Global Affairs, telling the audience that Trump is a “charlatan” taking advantage of middle-class voters who support him.

Trump’s America first slogan isolates us in the world at a moment when few if any of the threats – of today’s threats – can be met without broad international effort and consensus, grounded in mutual interests and mutual respect, shared values

He battered Trump and laid out a vision of how the current administration could either be the beginning of a civilization-ending downfall or a temporary aberration.

“How many of you now, whether you voted for him or not, are beginning to wonder if the roots, the invisible moral fabric that holds everything up, is eroding in a way that’s dangerous for democratic institutions?” Biden said. “If we don’t stand up, the liberal world order we championed will quickly become an illiberal world order we suffer.”

“Today, I worry we’re walking down a very dark path that isolates the United States on the world stage, endangers the American people,” he said, calling Trump’s America-first mentality “closed and clannish,” defined by “ideological incoherence, inconsistent and erratic decision-making.”

The Chicago Sun Times coverage elaborated on the the fact that Biden spent considerable time during the speech discussing Putin without directly commenting on the Trump-Russia investigation or Special Prosecutor Mueller’s Monday indictments.

“Putin and his cronies want only to preserve their wealth and their power,” he said.

At every turn Putin has sought undermine democratic institutions and weaken the bonds of western allies, Biden said.

“Appeasement will not work. So far, our sitting president has been unwilling to call out Putin for Russia’s meddling in our democracy or criticize his actions. Astonishing,” he said.

“Putin and his cronies seek to return to a world where the strong impose their will through arms corruption and criminality on their weaker neighbors.”

The Chicago Sun Times reports that: “More than 14 heads of state had been in touch with him [Biden].”

“All wanted me to visit them. Or to come visit me,” he said of the foreign leaders, adding: “It’s a difficult place to be, because I would never say anything negative about any American president overseas. And it’s not my place to explain their policies.”