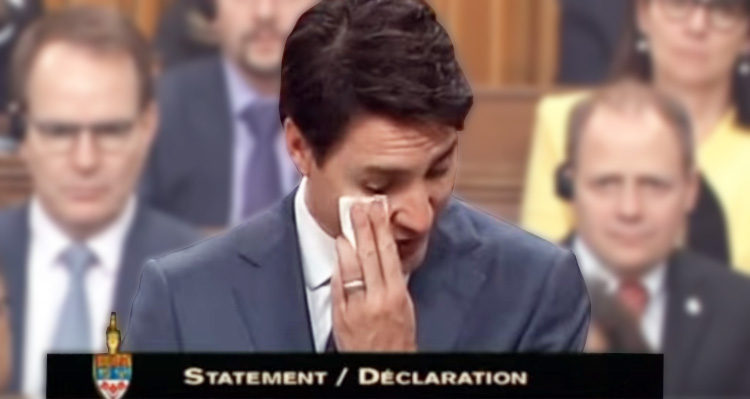 The Toronto Star reports that: “Prime Minister Justin Trudeau has formally apologized for the ‘tragic act of discrimination’ that saw hundreds of civil servants the target of a decades-long ‘witch hunt’ because of their sexual orientation.”

Speaking in a hushed House of Commons Tuesday, Trudeau related the disturbing legacy of systemic discrimination and delivered a long-awaited and detailed apology to those who suffered at the hands of a “prejudiced” system.

“The number one job of any government is to keep its citizens safe, and on this, we have failed LGBTQ2 communities and individuals time and time again,” Trudeau declared. “It is with shame and sorrow and deep regret for the things we have done that I stand here today and say we were wrong, we apologize, I am sorry, we are sorry.”

“For the oppression of the lesbian, gay, bisexual, transgender, queer, and two-spirit communities, we apologize,” he continued.

Wiping tears from his eyes with a handkerchief, he added: “On behalf of the government, parliament, and the people of Canada, we were wrong, we are sorry, we will never let this happen again.”

The Guardian provided the following background:

From the 1950s to the early 1990s, the Canadian government monitored and interrogated civil servants who were believed to be gay or transgender. Thousands in the public service, military and Royal Canadian Mounted Police were fired or intimidated into leaving their jobs.

The Toronto Star reported on some of the reactions:

Listening, with many weeping, in the gallery were former LGBTQ employees including Michelle Douglas who fought her dismissal from the Canadian Armed Forces 25 years ago, and Douglas Elliott, the lead lawyer in a class-action lawsuit that fought for Tuesday’s apology and an unprecedented $145 million settlement – the largest of its kind anywhere in the world.

“I was truly overwhelmed,” said Elliott, who sat in the gallery alongside his husband and partner of 41 years. “I cried several times. We were both crying. I never thought I’d live long enough to hear this.”

Trudeau uttered the words that the people who lost their jobs, and in some cases their loved ones, needed to hear, Elliott said, that “They were good people. And that the government was wrong. That’s what they needed to hear, and also that we’re never going to let this happen again.”

The Guardian noted that:

The apology was the latest in a series of statements by the two-year-old Liberal government seeking to make amends for historical wrongs. Trudeau used a speech to the UN general assembly in September to acknowledge Canada has failed its indigenous people.

The government also introduced legislation that would allow people to apply to have their criminal convictions for consensual sexual activity between same-sex partners erased from public record.