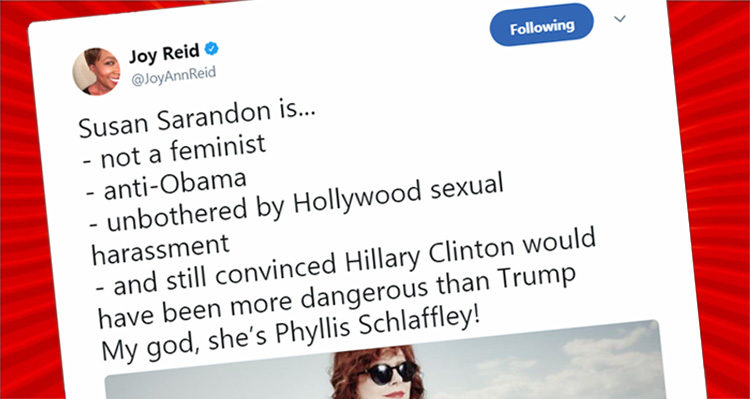 Twitter responds after Susan Sarandon issued a warning to people who want Hillary Clinton for President.

In addition to acting, Susan Sarandon is well-known as a social and political activist. For the most part her social activism has remained free of controversy – at least from people on the left.  However, her political activism often runs afoul of liberal and progressive causes – causes she claims to support.

For instance, arguably’ she has helped Republicans win the White House by putting her support behind third-party candidates who took important votes away from Democratic candidates. Sarandon supported Ralph Nader during his bid to win the presidency in 2000, the election that narrowly elected George W. Bush over incumbent Vice President Al Gore who won the popular vote 48.4% to Bush’s 47.9%. (And, in all fairness, she urged Nader to drop out of the race in 2004, asking his supporters to vote for Democratic candidate John Kerry instead.)

A similar set of events happened during the 2016 presidential election. Initially a supporter of Bernie Sanders, Sarandon endorsed Green Party candidate Jill Stein on October 30, 2016. As with Bush, Trump ascended to the Oval Office after having lost the popular vote by a larger margin than George W – 46.1% to Hillary Clinton’s 48.2%.

And all this was after she told MSNBC’s Chris Hayes in March 2016 that she didn’t think she could vote for Hillary Clinton were she to win the nomination, telling Hayes: “You know, some people feel that  Trump will bring the revolution immediately. If he gets in, then things will really explode.” Asked by Hayes whether it would be dangerous to allow Trump to become president, she replied: “If you think that it’s pragmatic to shore up the status quo right now, then you’re not in touch with the status quo.”

Most recently, Sarandon is digging her heels in regarding Hillary in an interview published by The Guardian on Sunday, 26 November 2017. Asked if she really said that she thought Hillary was more dangerous than Trump, Sarandon responded:

The Guardian went on to note that: “It seems absurd to argue that healthcare, childcare, taxation for the non-rich wouldn’t be better now under President Clinton, and that’s before we get to the threat of deportation hanging over millions of immigrants.”

Sarandon answered that Hillary “would’ve done it the way Obama did it – which was sneakily.”

He deported more people than have been deported now. How he got the Nobel peace prize I don’t know. I think it was very important to have a black family in the White House and I think some of the stuff he did was good. He tried really hard about healthcare. But he didn’t go all the way because of big pharma.

The Guardian also touched on the issue of Sarandon throwing her vote away with Stein. Asked whether she had “any sympathy with the critique that casting a protest vote is the luxury of those insulated from the effects of a Trump presidency?” Sarandon responded: “It wasn’t a protest vote. Following Bernie wasn’t a protest.”

The Guardian followed up, pointing out that “Voting for Jill Stein was, by any definition, a protest vote,” to which Sarandon responded:

Well, I knew that New York was going to go [for Hillary]. It was probably the easiest place to vote for Stein. Bringing attention to working-class issues is not a luxury. People are really hurting; that’s how this guy got in. What we should be discussing is not the election, but how we got to the point where Trump was the answer.

Democratic political strategist and organizer and Hillary adviser Adam Parkhomenko weighed in, accusing Sarandon of being a fake Democrat, tweeting: “Dangerous Republican Susan Sarandon, who plays a Democrat, can’t stop talking about Hillary Clinton. You would think she is being paid by RT or Sputnik in an attempt to divide Democrats.”

Tom Watson, the president and founder of CauseWired and a contributor to The New York Times, The Daily Beast and other leading publications, warned Sarandon supporters: “Make a list. Mark them down. It doesn’t get worse for those posing left, but bathed in privilege and lack of empathy for Trump’s victims. They’re not progressive allies, and never were.”

Note well defenders of Susan Sarandon today. Make a list. Mark them down. It doesn't get worse for those posing left, but bathed in privilege and lack of empathy for Trump's victims. They're not progressive allies, and never were.