Twitter Delivers A Knockout Blow To Trump With #OnTheDayTrumpResigns 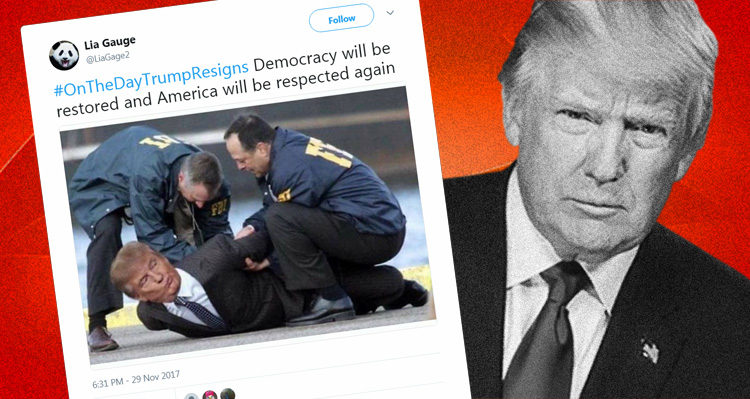 Trump has suffered one of the worst periods in presidential history beginning on Thanksgiving.

Trump sounded like some mad man losing it as he took time out from golfing at his Mar-a-Lago property in Florida to give a bizarre speech at the local Coast Guard Station on Thanksgiving Day, ranting about an invisible fighter jet and Hollywood movies.

Then, on Friday, Trump was humiliated by Time Magazine – not once, but twice – after tweeting that he had turned down the offer to be named as Time’s Man [Person] of the Year.

Conservative commentator Bill Kristol weighed in on the controversy, tweeting that he hoped that Robert Mueller would end up being named Time’s Person of the Year.

Humiliation continued to rage over the weekend as #RoastTrumpIn4Words took Twitter by storm.

Next, Twitter was merciless in its response when Trump had a Twitter Tantrum about main stream media ending with a post about a “FAKE NEWS TROPHY!” That post received more than 51K comments in less than 3 hours.

There was another series of Twitter humiliations after Trump posted about Russia on Saturday.

Also on Monday, there was Trump’s Pocahontas slur and Alex Baldwin’s withering takedown later that evening as he channeled Trump during a speech at an Iowa Democratic fundraiser, apologizing for that racist remark.

That takes us to Wednesday, when Trump received a sharp rebuke from one of our nation’s closest allies.

Trump shared three videos posted by Jayda Fransen, deputy leader of the fringe group Britain First, which opposes what it calls the “Islamization” of Britain and has engaged in a series of stunts, including occupying mosques.

“It is wrong for the president to have done this,” Prime Minister Theresa May said in a statement.

Meanwhile, Twitter explodes in hilarity with the hashtag: #OnTheDayTrumpResigns.

Below are a few favorites:

#OntheDayTrumpResigns ~
Trump will require torches all over America to be lit at half-staff.
🇺🇸 🇵🇷 🇲🇽 will celebrate 🎉 pic.twitter.com/VV9V6ufCg4

#OnTheDayTrumpResigns he will quickly become a bad memory. Like that first husband that won’t get off the couch. pic.twitter.com/jm6caMi5FD