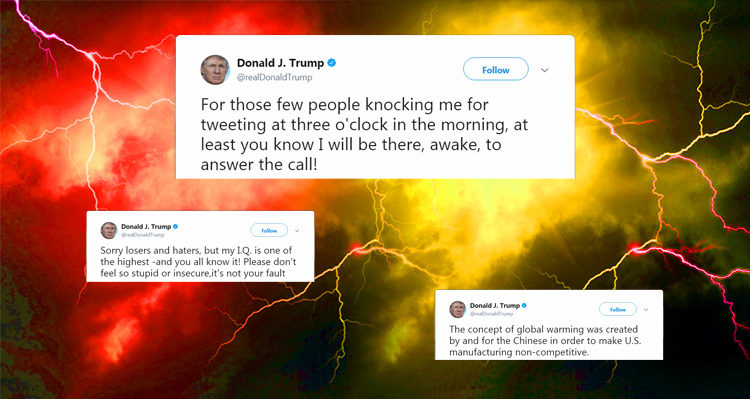 Each tweet sets off a series of lightening that roars through the clouds mimicking a vicious thunderstorm.

French artist Parse/Error has come up with a great way to respond to Trump’s incessant need to Tweet insane gibberish at all hours of the day and night.

Multidisciplinary designer ParseError redefines ‘political climate’ with his latest lamp design. the political lamp stirs up a thunderous storm for every   trump tweet in real-time. talk about pathetic fallacy! each tweet is materialized by a series of lightning roaring through the clouds, disturbing the soft glow of the lamp.

Parse/Error provides the following short bio on his website: “

I am a French artist, based in Marseille. Self-taught, my work is born of the encounter between art, design and technology. I explore the relationships between humans and their environment, seeking to provoke questions and sensations through interactivity and connectivity.

The Political Lamp is a connected cloud, capable of reacting in real time to messages posted on Twitter, creating a thunderstorm every time a tweet is posted on one of the accounts it monitors. Each tweet is then materialized by a series of lightnings, rolling in the cloud and disturbing the soft light of the lamp.

Regarding Trump, he writes:

The choice of setting the Political Lamp to follow the tweets of Donald Trump is explained by the fact that he perfectly embodies a dangerous era. A world where the words of one man, released without reflection and with spontaneity on a global social network, can endanger the fate of millions by spreading the ghost of nuclear war on the planet.

Continuing, he explains that:

The idea of the Political Lamp is to hide its true nature behind a beautiful object, which immediately modifies the observer’s behavior when its purpose is revealed, causing anxiety and fascination.

By definition, multiple disciplines. Often interchanged with multimedia artist (varies as to if this is a proper interchange), this area of expertise has begun to blend several disciplines together to form an altogether new field. A multidisciplinary artist has a wide knowledge-base that is deeply invested in range of materials, how those materials are used together, and the processes inherent to those materials. There’s a fairly diverse set of research backing material as well. Many contemporary artists fall into this category. This category encompasses much of the work that isn’t easily contained by the normal categories of art-making.

Below, is a great video by Mashable, showing the Political Lamp in action and explaining its relationship with Trump: