Trump Set To Fire Mueller On December 22: Seth Abramson Explains What This New Rumor In Congress Means For America 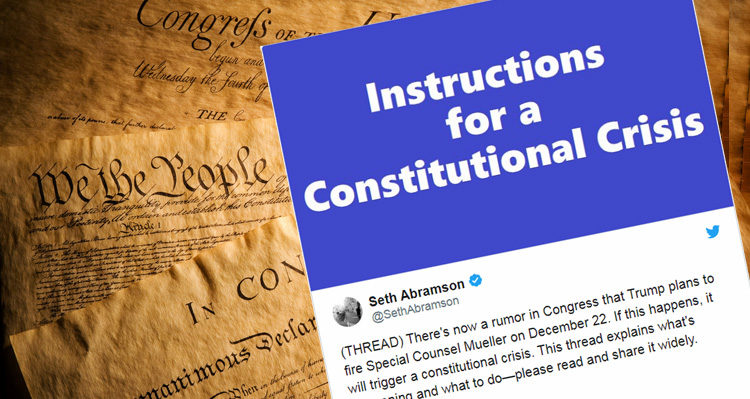 “There’s now a rumor in Congress that Trump plans to fire Special Counsel Mueller on December 22. If this happens, it will trigger a constitutional crisis.” ~Seth Abramson

[S]he believes Republicans are trying to shut down the House Intelligence Committee’s probe into alleged Russian interference in the 2016 elections. Speier also said, “The rumor on the Hill when I left yesterday was that the president was going to make a significant speech at the end of next week. And on Dec. 22nd, when we are out of D.C., he was going to fire Robert Mueller.”

As KQED News reported in a subsequent article, “Schiff, who also sits on the House Intelligence Committee, says that no witnesses have been scheduled after next Friday, and that dozens of outstanding witnesses have not been contacted. He tweeted that there will be interviews next week, but they will be held out of state while important votes will be keeping members of Congress in Washington D.C.”

By shutting down the congressional investigations when they continue to discover new and important evidence, the White House can exert tremendous pressure to end or curtail Mueller’s investigation or cast doubt on it. We cannot let that happen.

“As the White House has consistently said for months, there is no consideration of firing the special counsel,” Cobb told CNN in a statement.

Attorney and University of New Hampshire professor, Seth Abramson, weighed in the rumors on Saturday in a post declaring that “This is an actual emergency.”

Abramson’s post is captioned by an image that reads: “Instructions for a Constitutional Crisis” and details exactly how this scenario might play out.

Abramson’s numbered observations are detailed below: