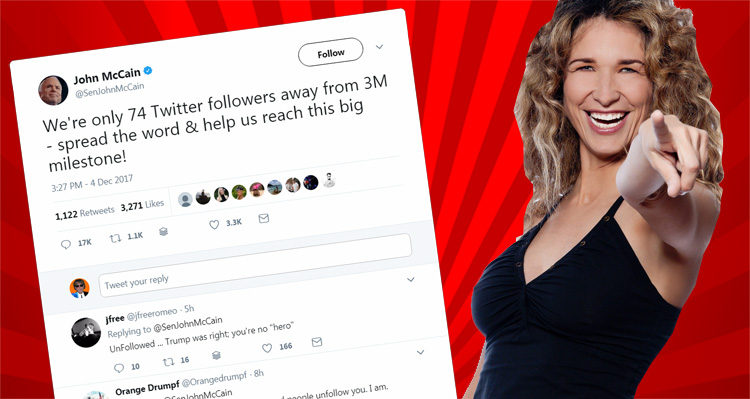 John McCain suffers one of the most embarrassing days in the history of Twitter.

Americans are angry; and no one knows that better than Republican Senator John McCain of Arizona, after suffering one of the most humbling experiences in the history of Twitter.

Lo and behold, Twitter was quick to respond, but not in the way McCain had hoped. At the time of publication of this article, McCain has now dropped to 2,978,646 followers for a net loss of 21,280 followers. In the time it took us to write this article (less than an hour), he lost 669 followers. So the humiliation continues.

And then there was the indignity of all the responses to his tweet.

Frederick Douglas, a favorite of ours responded: “John, earn your followers the normal way, by tweeting meaningful things. Begging for followers doesn’t feel like regular order. Oh yeah, you don’t give a shit about regular order. Silly me. Carry on.”

Oh yeah, you don't give a shit about regular order.

Silly me. Carry on.

Several of the responses expressed concern over the GOP tax scam that narrowly passed the Senate along partisan lines late last week.

As The Verge reported today:

“People are unfollowing Sen. John McCain (R-AZ) on Twitter to make their distaste for the recently passed tax reform bill known. The bill was passed on Saturday and has multiple pitfalls, as identified by The New York Times. These include a tax cut for the rich, more taxes for graduate students, raised taxes for millions of middle-class families, and permission for oil and gas drilling in an Alaskan wildlife refuge, among many other nightmare scenarios disguised as economic stimulus measures.”

Democratic Coalition Chair Jon Cooper tweeted: “So, after helping pass the horrible #GOPTaxScam bill and voting to take away healthcare from millions of Americans, @SenJohnMcCain’s top priority now is to reach 3M Twitter followers. If you’re following this selfish hypocrite, today would be a great day to #UnfollowMcCain!”

Some other noteworthy responses included: