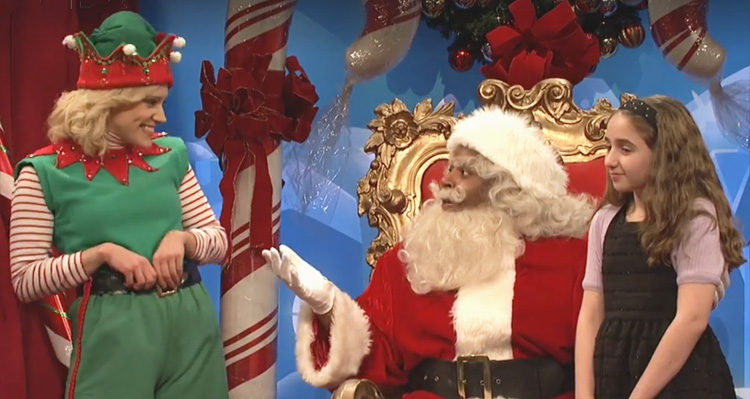 Santa’s naughty list this year is actually more of a ‘registry’ than a list; it includes Al Franken, Roy Moore, Matt Lauer, and Trump.

Santa Claus (Kenan Thompson) and his elf sidekick (Kate McKinnon) visited Saturday Night Live in this week’s opening sketch and took on the controversy regarding the recent rash of misconduct allegations leveled against politicians.

The first child to talk to Santa, Tyler, asked for a MEGA Bloks dinosaur, a laser tag, and asked Santa: “Can you tell me, what did Al Franken do?”

Distraught, Santa responded “Wow! Let’s see. I think I can handle the MEGA Bloks and the laser tag thing,” but handed off the question to his elf – McKinnon. “Can you take the Al Franken thing, sugar plum?”

“No,” McKinnon answered. “And in this climate, can you just call me Amy?”

Santa went on to explain to Tyler: “I guess you could say that Al Franken is on Santa’s ‘naughty list’ this year.”

“And what about Roy Moore?” Tyler asked. “Which list is he on?”

“It’s not really a list,” McKinnon responded, adding “it’s more of a registry.”

The next child to visit Santa was Jessica.

“I wanted to follow up on Tyler’s question,” she began. “Is President Trump on the naughty list?”

“You know, Santa tries to stay out of political matters,” Thompson responded. “Our president may have said or done a few naughty things.”

After shushing McKinnon, Thompson turned his attention back to Jessica – telling her: “Look Jessica, I’m sure we can all learn a lesson from what’s going on in the news.”

“We sure can,” Jessica responded. “I learned that if you admit you did something wrong, you get in trouble. But if you deny it, they let you keep your job.”

Santa cautioned her to be careful, or “you might get coal in your stocking.”

“From where?” Jessica replied. “We all know coal is a dying industry.

The other kids were eager to talk about NFL players kneeling during the national anthem, the opioid epidemic, and the sexual misconduct allegations against former “Today” anchor Matt Lauer.

McKinnon’s character reassured one girl that, although “things seem particularly insane right now, like truly mind-bendingly insane,” everything will be OK — “maybe not today, maybe not tomorrow, maybe not for another 3 years, 42 days and 24 minutes.”

You can watch the skit, below, and be sure to share your thoughts in the comments.