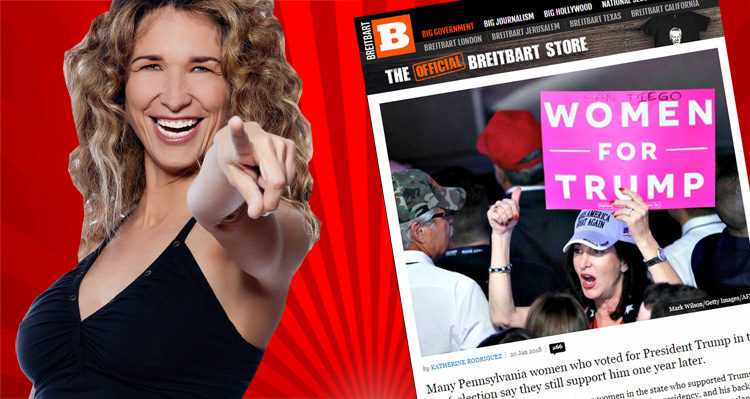 Breitbart reaches beyond the realm of reason in a vain pathetic attempt to draw positive attention to Trump in the wake of the powerful and successful Women’s March that drew hundreds of thousands of attendees from all corners of the world.

Vanity Fair reported that: one year after marchers took to the streets to protest the inauguration of Trump, “hundreds of thousands of protesters on Saturday poured through cities across the nation, and, indeed, the world. In the intervening year, a string of reports laying bare pervasive sexual harassment and misconduct in workplaces from Washington D.C.’s Capitol Hill to Hollywood’s studios have added further texture to the movement, with anti-Trump fervor remaining at, or at least near, its core.”

While the raw numbers didn’t quite match those of the unprecedented Women’s Marches of last year, this Saturday’s turnout around the country revealed a sustained, impactful resistance. Women told Vanity Fair they were inspired by the Time’s Up movement, by their communal sharing of #MeToo experiences of sexist treatment and/or sexual misconduct, and a general sense of being fed up with what they characterize as a patriarchal status quo.

The Cut reported that: “While there has been no official countrywide or worldwide estimate of the number of people who participated, many people walked shoulder-to-shoulder in crowds in the hundreds of thousands.”

Some cities, such as Chicago and Philadelphia, had larger protests this year than last…. It’s estimated that the two cities combined had more than 300,000 protestors.

Bill De Blasio, mayor of New York City, cited 200,000 as the official number of attendees in a Sunday morning tweet, adding that: “It was the one year anniversary of one of the greatest protests in American history, and it was a promise to keep the fight going.”

Over 200,000 people took to the street yesterday in New York City to fight for the future of their country. It was the one year anniversary of one of the greatest protests in American history, and it was a promise to keep the fight going. https://t.co/U2ZBaOnao3

The Evening Standard reported that: “In Las Vegas on Sunday thousands gathered for the ‘Power to the Polls’ protest, kicking off a drive in the US to register a million new voters as well as put more female candidates in office in an effort to stand up to Mr Trump’s agenda.”

“When our country was in free fall, the Women’s March got us out of our despair and out of our homes and into the streets,” said Cecile Richards, president of Planned Parenthood, adding: “And ever since that day, women have been shaking the foundation of America.”

From New York to Seattle, check out these aerial views of the Women's March across the country https://t.co/8MA1xumK9i pic.twitter.com/8MD9r9kcYz

Meanwhile, over in the land of Breitbart, it seems the best they could do was come up with “more than half a dozen” women from Pennsylvania voicing “support for Trump on [the] first anniversary of [his] inauguration.”

Worse yet, the basis for the article came from another news agency.

Reuters interviewed more than half a dozen women in the state who supported Trump in 2016 to see if they still feel the same way they did before his presidency, and his backers remain committed to him, citing his policies on immigration and his tax reform plan as their reasons for supporting him.

For his part, Trump seemed content to spin the march into one of support for none other than himself, tweeting: “Beautiful weather all over our great country, a perfect day for all Women to March. Get out there now to celebrate the historic milestones and unprecedented economic success and wealth creation that has taken place over the last 12 months. Lowest female unemployment in 18 years!”

Beautiful weather all over our great country, a perfect day for all Women to March. Get out there now to celebrate the historic milestones and unprecedented economic success and wealth creation that has taken place over the last 12 months. Lowest female unemployment in 18 years!