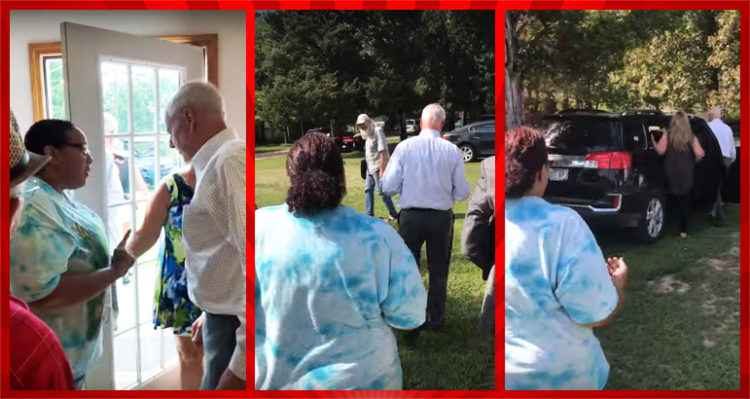 U.S. Representative Steve Womack of Arkansas was captured on video fleeing an African-American constituent asking a question during a recent town hall meeting.

Rep. Stephen Allen Womack (R-AR) has had a less than stellar tenure serving as U.S. Representative for Arkansas’s 3rd congressional district since 2011.

Formerly the mayor of Rogers, Arkansas, (population roughly 56K) he spent his twelve years in office attempting to drive out immigrants by assigning two Immigration and Naturalization Service agents to the Rogers Police Department, resulting in the Mexican-American Legal Defense and Educational Fund filing a class-action lawsuit against the city for racial profiling.

In 2011, he filed an amendment to the GOP’s spending bill in a vain attempt to defund President Barack Obama’s teleprompter. As Gawker reported at the time, “Womack pulled his amendment the next day because, according to Fox News, ‘he wasn’t able to get an estimate on how much it would save.’ That’s a fair excuse. (Quitter.)”

“In 2010, Womack signed a pledge sponsored by Americans for Prosperity promising to vote against any global warming legislation that would raise taxes,” according to Wikipedia.

He also has a history of problems with constituents during his infrequent town hall meetings.

For instance, Fox News reported in 2013 that: Womack “admonished one of his constituents last week for wearing a T-shirt featuring a Mexican flag during a town hall meeting where the man asked a question about immigration.”

“[I]t does strike me as a bit odd that I would get a question as to why we shouldn’t just automatically make it legal for people who didn’t come here in a legal circumstance, with a flag of another country hanging around his neck,” Womack said, adding: “This is just some good old friendly advice. If you want to win friends and influence people on the issues that you are talking about, I would suggest a little different approach in terms of my attire when I’m appealing to an audience like this.”

Lo and behold, Womack had another incident this week during a town hall – this time with an African-American constituent.

Things Daily reported that: “During a town hall in Arkansas, Representative Steve Womack (R-AR), who casually chatted with white constituents, was posed a question by Daniella Scott, a black woman living in his district. Rather than engage her, the Republican lawmaker opted to ignore his constituent, a move to which she did not take kindly.”

Now This posted a video of the incident showing Scott expressing her frustration with Womack for flagrantly ignoring her.

In the clip, she can be observed telling Womack: “Every town hall that I’ve seen of yours, I have seen people of color in the audience trying to get you to answer a question and you’ve just absolutely refused to do it. That’s why I’m here today, because you will not answer my question.”

"Am I that worthless to you as your constituent?" A Black woman confronts her congressman (R) about him ignoring people of color along with her being ignored as well. 👊pic.twitter.com/axZxrAXLR9

You can watch the full clip below without the annotations: